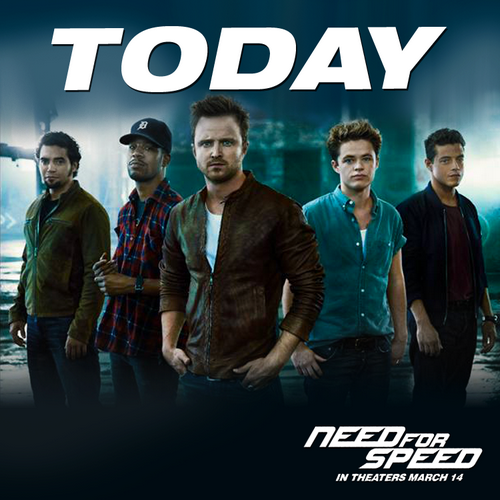 Looking for something to do? How about packing up your friends and cruising over to see ‘Need for Speed‘ tonight? The film takes a modern day spin on the great car-culture movies of the ’60s and ’70s. It’s got honor, friendship, loyalty and the testosterone-fueled journey of one man looking for revenge.

Aaron Paul, known for his role on ‘Breaking Bad,’ plays your average guy working at his family’s auto shop, but races the underground street circuit with his buddies on weekends. In an interesting turn, he is sent to prison for a crime he didn’t commit. For two years he stews on his growing need for revenge. Deciding he wants a personal redemption, he decides to seek out vengeance…no matter what it might cost him.

Based on the eponymous car-racing video-game franchise, “Need for Speed” captures the freedom and excitement of the game in a real-world setting while bringing a level of intensity and authenticity to the action on-screen. Translation – even if you are single, this flick will be packed with guys.

Crazy camera angles and risky techniques were used to film the scenes where car chases took over. Filmmaker Scott Waugh explained, “We went back out on the road, travelling at high speeds and hanging out the side of the car to film this. I wanted the audiences to really feel what it’s like to drive 230 miles per hour.”

The film is currently in theaters everywhere.