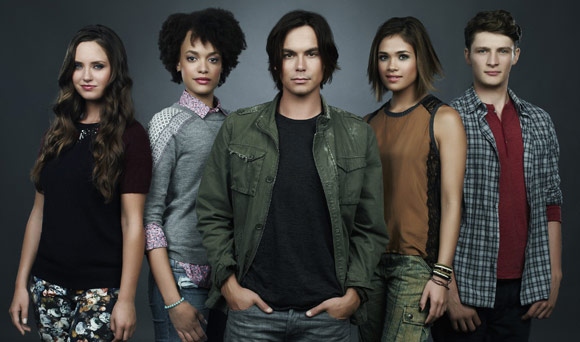 Last year when ABC Family announced their Pretty Little Liars spinoff series Ravenswood, fans were ecstatic, and then they learned there was a catch.  Tyler Blackburn, who played a key role on Pretty Little Liars as Hanna Marin’s boyfriend Caleb Rivers, would be leaving PLL and moving to Ravenswood.

Pretty Little Liars fans watched during Season 4 of Pretty Little Liars as Hanna coped with her break-up after her boyfriend Caleb ditched her and ran off to the spooky supernatural town of Ravenswood.  After a few episodes Hanna got some closure, and began to move on, and after a few rough patches she seems to be in a really good place with her new love interest Travis.  At first PLL fans didn’t like the idea of seeing Hanna with anyone other than Caleb, but after a few sweet scenes between Travis and Hanna, he is starting to grow on fans.

So, Caleb Rivers is coming back to Rosewood.  Hanna just spent an entire season getting over him, and he is just going to walk back into her life in Season 5?  What is going to happen to Travis and Hanna now that Caleb is back in town?

How do you feel about Tyler, aka Caleb, returning to Pretty Little Liars?  A lot has happened since Caleb left town, how are the writers going to fit him into their new storylines?  Share your thoughts and theories on Tyler Blackburn returning to PLL in the comment section below.