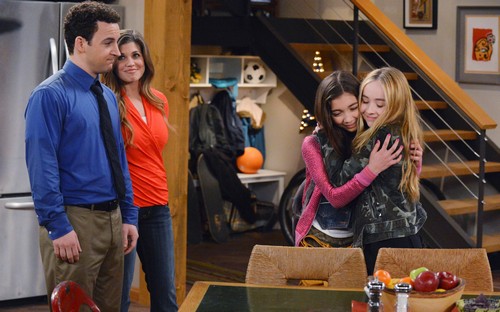 ABC’s iconic 90’s TV show Boy Meets World is a find childhood memory for any kid that grew up during the 90’s.  So, you can imagine how pumped everyone was when Disney announced last year that there would be a spin-off titled Girl Meets World premiering in 2014.

Girl Meets World will follow the life of 7th grader Riley Matthews, the daughter of Boy Meets World’s high-school sweethearts Cory and Topanga Matthews, who are now married and living in New York City.  Spy Kids alum Rowan Blanchard has been cast as Riley, ad her parents Cory and Topanga will be played by the original cast members Danielle Fishel and Ben Savage.  Other Boy Meets World cast members, including Rider Strong, Betsy Randall, William Russ, and William Daniels, have all been slated to appear in at least one episode of Girl Meets World this summer on the Disney Channel.

Today E! Online released a never before seen sneak peak of the Boy Meets World spin-off’s new trailer.  In the video clip Riley Matthews and her BFF Maya (Sabrina Carpenter) attempt to sneak out of the house, via the fire escape and Cory Matthews catches them.  In a super cute reference to Boy Meets World Riley asks Cory, “How long will I have to live in my Father’s world.”  Cory (Ben Savage) replies, “Until you make it yours.”

So 90’s kids, on a scale of 1-10 how pumped are you for the Boy Meets World spinoff to air this summer on the Disney Channel?

Justin Bieber and Selena Gomez–Back Together In The Recording Studio