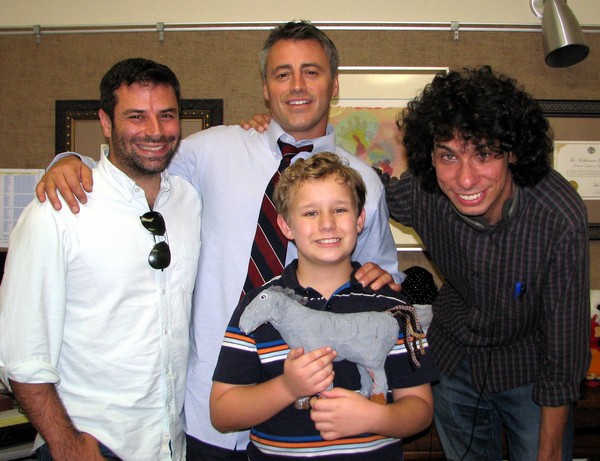 You know him and love him as the bratty big brother in the now legendary “sling-baby” Doritos® commercial that aired shortly before the Superbowl halftime show, but young actor Carsen Warner has a long list of credits to his name that are quite impressive! Carsen Warner spoke exclusively to CelebTeenLaundry to share some personal details and upcoming projects with YOU…his fans!

An admitted video game addict, Carsen has to fight for time to relax with friends and play Minecraft because this is one busy kid! Having starred in Lovesick with Matt LeBlanc most recently, Carsen has also appeared in Criminal Minds, Funny Days, Mob City, The Measure of a Man, Cabo Bob, Firsts, and Instant Mom to name a few.  If that wasn’t enough, he’s also done voice over work as well. That is quite a lengthy resume for a young actor, so we had to ask which project was his favorite so far. Carsen shared that it was undoubtedly, “an episode of Criminal Minds” because of a scene in which there is a tornado. He adds, he enjoyed “sitting in the heater tent” watching as the set was doused with spraying water to simulate the bad weather. He also really enjoyed working with Matt LeBlanc in Lovesick telling us, “I had so much fun working with him. It is great because he is a professional actor who has been around for a long time.” In addition to rehearsing one-on-one with Carsen, he shares that Matt also provided great advice. They had some fun too, as Carsen shares that he enjoys a good prank every now and then while working.  Remember, this talented actor is still a kid!

And as a kid, he enjoys the same things other kids enjoy as well. Carsen plays video games, goes to the movies, and hangs out with friends when he is not working. He also loves building things like trap doors and other fun projects he can engineer.  Carsen also shared that he is a talented dancer as well! Well, he just said “hip hop dancer,” we added the “talented” part…because we know there is nothing this amazing guy cannot do! He’s enjoyed hip hop dancing since he was only six years old, practicing while his mom would turn on the music for him.  While he still loves dancing, he hasn’t had much time to practice, but we hope to see some of his moves on the big screen at some point!

Having gotten his start at age 6, Carsen shares that he knew early on that he wanted to be an actor, sharing “I enjoy being on camera.” As a young boy, he started by making small films and his mother took note of his passion. Speaking of Carsen’s mother, we have to say we are very impressed with some of the life’s lessons she shares with Carsen as he navigates his way through Hollywood. When we asked Carsen how he feels about playing roles unlike himself he told us, “It’s a lot of fun. Doing something that I would not normally do, or that I might get in trouble for is fun because it is unlike myself,” he goes on, “like being a bully. I have had roles where I was a bully but my mom talks to me about it. She tells me how many bullies get bullied themselves.” We at CTL think it is refreshing and wonderful to hear about the conversations that Carsen’s mom has with her son. In fact, his mom brought the family back to Los Angeles for Carsen to pursue his dream of acting after having lived in Nevada for a while. After speaking with him and getting to know him better, it is obvious he’s had some terrific guidance as he is a mature, respectful person. His fun personality comes through his voice and it is obvious he loves what he does.

While lots of actors would love the chance to work with Carsen, we asked him who he’d choose as a costar if he could pick anyone. Carsen didn’t hesitate for a moment when he responded, “Adam Sandler!”  While he hasn’t yet met his favorite actor, Carsen says he’s been a fan since he was little noting that the epic comic “is awesome!” We think Carsen is pretty “awesome” himself!  We know you do as well, so be sure to check out the upcoming episode of Instant Mom that Carsen stars in. You can catch Instant Mom all week on Nick Jr. The episode Carsen recently starred in is called Requiem for Mr. Floppity and will be on Nick Jr. on April 22 at 8:00PM PDT and again on Wednesday, April 23 at 8:00PM PDT. Stay informed on all of Carsen’s upcoming movies and projects by following him on Twitter @CarsenWarner, and Facebook Carsen-Warner. Don’t forget to check out the hilarious commercials Carsen has starred in that can be found on You Tube!

How to choose the perfect everyday purse