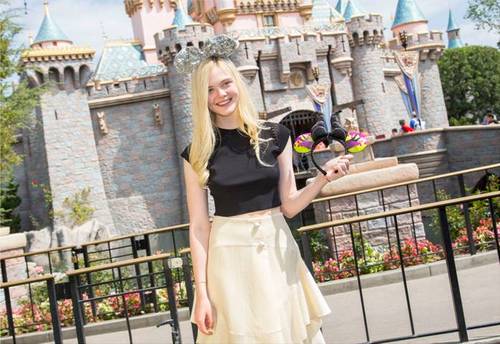 You still have to wait until May30th to see Angelina Jolie in he behorned glory in ‘Maleficent,’ but you can catch Elle Fanning trying on some Mouse Ears inspired by the film!

The 16 year-old younger sister of Dakota Fanning hit up Sleeping Beauty’s castle in Disneyland to show off some new footage of the upcoming reboot at Disney’s Social Media Moms Conference. While there, she played naughty and nice while trying on some different Mickey Ears. She wore a black knit top with a pale yellow flared chiffon skirt. It was simple and elegant. Later, the starlet changed into jeans, sneakers and fun Chanel sweatshirt. She looked comfortable, fun and just like any other teen spending the day having fun.

After posing for photos, she spent the rest of the day holding hands with her boyfriend. They rode the Matterhorn together and Elle even got a butterfly painted on her face. Just a few days before the Disney trip, she celebrated her 16th birthday and the mystery boyfriend reportedly attendant that private dinner too.

When it came to working with the film’s producer and star, Angelina Jolie, Fanning stated that she had nothing but admiration for her co-star. “She really got into her character in a way. Like she was very, so into the details of her clothes. She came into rehearsals on the first day…with her Maleficent staff and she was in normal clothes, but then had that,” Elle explained. “And she was like, ‘I have to get used to it; it’s part of my character.’ I thought that was so cool.“

Overall, starring in the film was an amazing experience, but she said that having the Oscar winning co-star was reward in itself. “Working with Angelina – it’s kind of a dream to say that you even met her and let alone to be in scenes with her,” Fanning paused before simplifying her thoughts, “it was really really cool.”