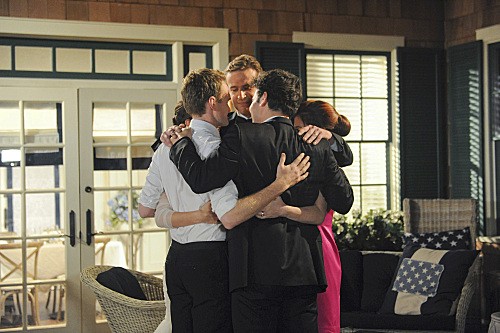 It was a bitter ending to a show loved by many as How I Met Your Mother aired its final episode last night on CBS after a nine-year run. While the final episode had its fair share of drama, it cannot compare to the drama that came after the show as angry fans took to Twitter to share their dismay of the final episode, and it wasn’t pretty.

It seems the fans most bothered by the twist in the final episode are the fans who claim to be the most dedicated, having remained a steady fan through all nine seasons of the show. The good news for all fans was that the fate of their favorite characters was revealed in the final episode. The bad news is, most were unhappy with the direction the writers took in more than one storyline.

Barney (Neil Patrick Harris) and Robin (Cobie Smulders) married after fans had to wait through an entire season to see them finally become official, only to end up divorcing early on in the finale. Marshall (Jason Segel) and Lily (Alyson Hannigan) had another child, while Marshall has become a judge. Barney ends up with a child after a non-committal, random romp which seems to have a life-changing effect on him.

While all of those twists and turns were dealt with by fans rather well, it was Ted’s story that had fans angered beyond belief, wishing they could take back all the time they spent watching the show over the years. Had they known it would end this way, perhaps they would have. As Us Magazine reported, The Mother, aka Tracy McConnell, “got sick and died six years before Ted (Josh Radnor) told his children this epic story. They finally got married after five years together, and six years after her passing, Ted’s children realized he had told them this lengthy tale to see if it would be OK for him to ask Robin out.” He proceeds with his plan and rushes to Robin’s house, along with the blue French horn, and finally asks her out. Us magazine shared some fans reactions from Twitter:

@RahulRachuri1: Disappointed with the ending. We have waited nine years for the mother and we got see her for like 20min! #HIMYMFinale #letdown

@adelinalee: Not sure whether the #HIMYMFinale is trying to make me feel cynical that nothing lasts or hopeful that true love wins in the end

@JrzGrlinNC: It started w Robin & ended w Robin, kind of makes sense if u really think about it #HIMYMFinale

‏@Mark_B99: Ended too quickly, shouldn’t have dragged out the first few episodes so much and then dropped so many bombs on the viewer #HIMYMFinale

@viviennelsen: I thought it was How I Met Your Mother, not “How I Went Back To Your Aunt Robin About 20 Times” #HIMYM #HIMYMFinale

@macachia: “how we destroyed 9 years of character development in one 40 minute episode ” #HIMYMfinale #HIMYM

@TheCityofBones: Was the How I Met Your Mother Finale an April fools joke or was it actually that bad? #HIMYMFinale

@Artianiruda: Killing the mother! Getting a couple divorce! Quite dint look like a comedy show to me!! Thanks for screwing it all up #HIMYMFinale

Some fans did approve, however, so only time will tell how many fans of HIMYM will consider watching the highly anticipated spinoff, How I Met Your Dad. Tell us what you thought about the series finale in the comments below! Will you watch HIMYD?