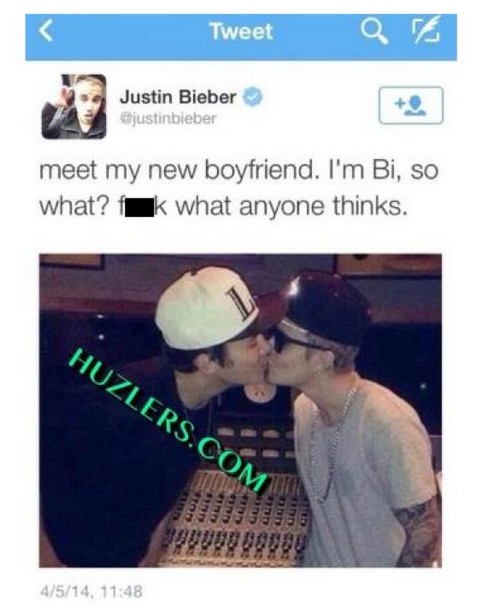 Austin Mahone is like the younger, sweeter, and less controversial version of Justin Bieber, which is probably why Selena Gomez allegedly dated the pop singer for a brief time in-between her break-ups with Justin “Bizzle” Bieber.  We were all pretty shocked last week when photos surfaced of Bieber and Justin Mahone hanging out in Miami together, and playing a friendly game of basketball.  Not only are they not mortal enemies like we all assumed they would be, the two pop sensations are apparently friends.

Apparently someone out there thought that the two singers should be more than just friends though, and over the weekend a Justin Bieber and Austin Mahone Bi-Sexual love scandal was created with a photo-shopped photo, which went viral.  It is unclear where the picture actually was created, but the scandalous website “Huzlers” is now taking credit for it.  The photo in question is a fictitious screenshot of Justin Bieber’s Twitter account, and a tweet from Bieber stating “Meet my new boyfriend.  I’m Bi so what? F—k what anyone thinks.”  And then below the tweet is a very fake photo of Justin and Austin kissing (props to the person behind the photo-shopping though, it does look ridiculously real).

Photo-shopping photos of celebrities allegedly kissing each other seems to be all the rage lately.  Just yesterday a photo of Jennifer Lawrence and Lana Del Rey making out went viral, and also was revealed as a fake.  Have you fallen for any celebrity photo-shopping hoaxes lately?  Or, were you secretly hoping Justin Bieber was cheating on Selena Gomez with Austin Mahone?

DIY: Banana Body Scrub: Get Your Body Ready For Summer