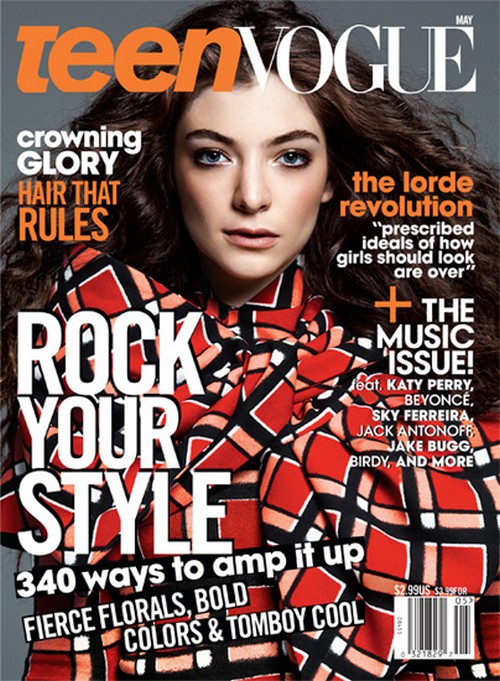 Lorde was recently on the cover of Teen Vogue, and had this to say about her style:

When it comes to her usual appearance, Lorde is the first to admit that her style is on the plainer side. Although she understands there are “expectations in [the] industry about looking a certain way,” Lorde tells the mag she prefers her tomboy look. “I am feminine,” she tells the mag, “but I really love dressing in boys’ clothes too. I guess that’s why I get labeled as ‘the grumpy girl,’ because I don’t play into that.”

I hate that she has to defend her style. She’s what, seventeen? Most people/parents should be glad that she’s not dancing around in booty shorts, or taking her shirt off to expose her pastie covered breasts , like Taylor Momsen. And quite honestly, I don’t care how a singer dresses (except to say that it’s amazing or hilarious, which, I suppose is a hypocrisy in it of itself), I only care if they can sing–sing LIVE. In my humble opinion, Lorde can sing. I think that she was really nervous at the Grammy’s (I would be too at 16), but she did really well.

I like Lorde, and I’d rather have a young, female feminist singer, who ‘dresses like a boy’, and who’s a little pretentious (by thinking she is SO deep and knowledgeable about the world, etc), than another Katy Perry (to save some adjectives like ‘autotuned’, ‘illiterate’, ‘dumb as a box of rocks’, etc).