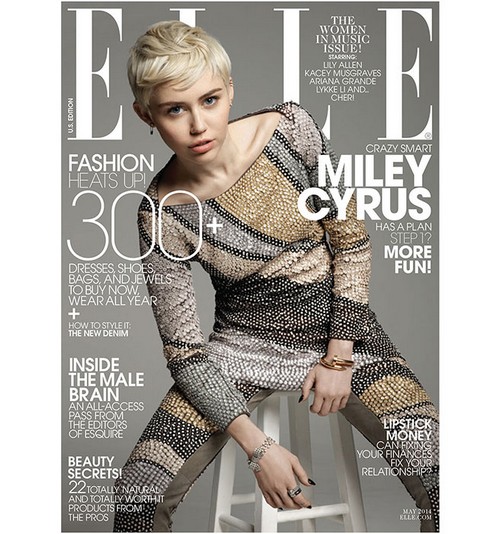 Miley Cyrus recently shot a cover for Elle magazine, talking about her time at Disney, and the aftermath of her breakup with ex fiance Liam Hemsworth.

The Disney comments are interesting, and a complete opposite to what she has said in the past–

“You know, I’m really thankful that I started on Disney. I got the most intense training. There’s times where I wish I could have just started as a new artist, but the world has kind of allowed me to do that. I feel really lucky — a lot of kid stars get all crazy or stuck in what they were, so they can’t actually become what they’re meant to be.”

Either her PR team told her to cool it with the inflammatory statements, or she figured out that it might not be a good idea to trash the thing that made you into a star–whichever it is, I’m glad to see that she’s watching what she says more. She’s not a child any more, and hopefully she realizes that she needs to do her job, and not rely on shock factor, or even Disney to help her sell CDs. She’s annoying me a lot less, probably because she’s not all over the place like she was right after the VMAs. She had SO many cringe worthy moments in interviews–including that borderline racist interview with Hunger TV, when she told the interviewer that she wouldn’t listen to the advice of ‘an old Jewish guy’. That turned me off of her for quite a while–and I still don’t like her all that much.

“When I went through a really intense breakup — you know, I was engaged — and when I was with him or when I was on Disney, the thing that gave me the most anxiety was not knowing what to do with myself when Disney wasn’t there to carry me anymore or if I didn’t have him. And now I’m free of both of those things, and I’m fine. Like, I lay in bed at night by myself and I’m totally okay.That’s so much stronger than the person three years ago, who would have thought they would have died if they didn’t have a boyfriend.”

I think this is a great attitude to have—and shows that she is growing up somewhat. Although I do side eye her on the intensity of the break up. I get that break ups are hard, in general, especially when you’re young and a dramatic–but come on. They dragged that break up out for SO long….people were speculating that they weren’t together/had ended their engagement months before they announced it. Which, coincidentally, coincided with the release of her single–Wrecking Ball. Cough. I remember a red carpet interview, when Liam’s older brother, Chris, was asked about Miley–he couldn’t even give a generic ‘she’s a great girl, I’m happy for them’ answer–if I’m remembering right, he said something along the lines of them being too young to get married. Or something about them maybe not being as solid as we thought.

But I’m glad that she’s being single and free, and not worried about a boyfriend. If I had a career like hers, I wouldn’t be worried either. I’d be hustling my butt off so I can buy myself some Elizabeth Taylor-style jewels.

Teen Mom 2 Not Getting Cancelled, Renewed For Season 6