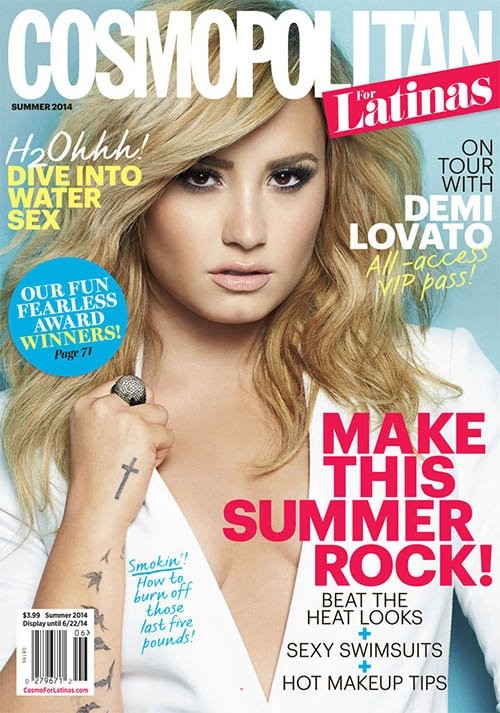 Demi Lovato’s changed a lot in the past few years, hasn’t she? Out of all the Disney stars that have lost their way, she’s one of the few that’s managed to claw back. Demi covers the latest issue of Cosmos Latina, and she opens up about her priorities in life, how she’s changed over the past few years, turning 21, and her inspirations.

On the topic of her 21st birthday, she explains, “I was used to drinking and doing drugs on my birthday. I always imagined my 21st being a huge party where I’d get sh*t-faced and go crazy. But I realized that there’s so much more to life than that. Imagine walking 10 miles a day just to get water for your family? We have so much to be grateful for.”

Well, if this was five years ago, that definitely would have happened. Demi wasn’t exactly the epitome of ‘wild child’ [at least, not outwardly], but she’s been open about her past addiction to partying and drugs. However, she’s one of the few young celebrities that saw that they were ruining their life, and decided to do something about it before it was too late. And now, she’s able to appreciate the lucky position that she’s in, and to never take that for granted.

She also discusses the fact that she didn’t have anybody to look up to when she was younger, and she felt that she needed be that person for the younger generation, including her sister. Unfortunately, she’s right – there aren’t a ton of positive role models for young kids, especially in the tween and teen generation. Demi herself isn’t the perfect person to look up to either, considering her past, but she’s better than most of her contemporaries.

Finally, Demi discusses dealing with her bipolar disorder, explaining, “It’s a daily thing. I treat it with medication. Not everybody does that, but for me it works. That’s what works for me — medicating, checking in with people, being honest, and being grateful for things.”

And it’s definitely clear that she is grateful for her life. It just took a while for her to get there.