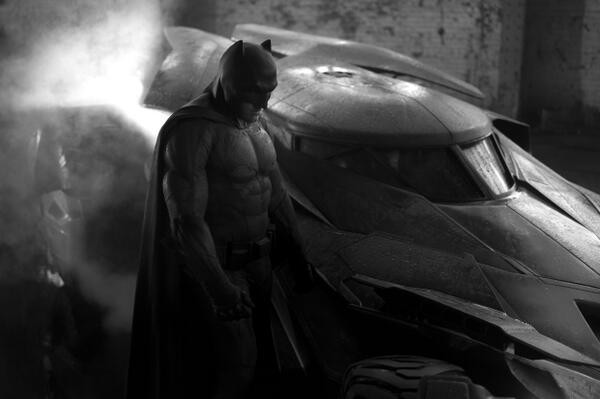 The first official photo of Ben Affleck as Batman has been released to the public, but I don’t know if we should be excited or apprehensive about this. It’s been less than three years since we’ve gotten our last incarnation of Batman, and an especially excellent one thanks to Christian Bale and Christopher Nolan, and here we are – just two years later, and we’ve got Ben ‘Daredevil’ Affleck as the legendary caped crusader.

The picture’s not particularly revealing, but it definitely seems to be Ben- his chin is pretty distinctive, no? But I have to say – putting aside the batmobile [which is always awesome], Ben looks a bit awkward in the role. You could argue that that’s how he’s supposed to look, staring at the floor and brooding. But even though the suit is great, Ben has managed to bulk up a LOT for the role, and it’s slightly off-putting. It’s different from Bale’s Batman, but it is a closer interpretation of the character from the comics.

Still, one picture from the film isn’t enough to tilt our opinions one way or another, especially when the casting decision is this hotly debated. If it was Nolan at the helm, I wouldn’t doubt Ben’s ability to stick the landing. After all, Nolan’s always had a history of making off-beat casting decisions, but they always turn out brilliantly. Zack Snyder, on the other hand, got praise for the casting of Man of Steel, but the movie itself was widely criticized. So did he hire Ben Affleck for his fame and his connection to Warner Brothers, or did he hire him because he was the best guy to play Batman? Right now, all we know for sure is that Ben can and has bulked up for the role – and that the Batmobile looks great.

DIY: A Spa in the Fridge and Pantry