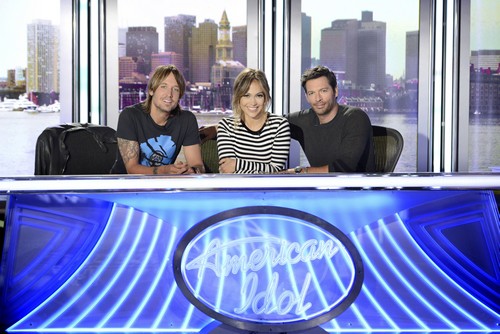 American Idol Season 13 is winding down, after months of judges Jennifer Lopez, Keith Urban, and Harry Connick Jr. weeding out thousands of singers, we have somehow made it to the Final Four.  However, it is no secret that American Idol’s have been sinking faster than a boulder, and multiple times this season Idol has reached new all-time lows.  According to multiple reports this season, FOX is actually losing money performing the singing game show, by the time they pay their celebrity judges’ ridiculous salaries.

We were all certain that this would be the final season of American Idol, and chances of a renewal were bleak.  Frankly, the majority of viewers were ready to bid the show adieu-it seems to have run its course.    And, then FOX shocked us all today and announced they were indeed renewing the shows for its 14th season.   FOX announced that American Idol auditions for the new season will be held in 15 different cities across the United States, and the auditions will kick off on June 18th in Minneapolis.

There is still no news on what celebrities will be appearing as judges on the all new season, and there is even a question of whether or not Ryan Seacrest will be the host- rumors have been circulating for weeks now that he is parting ways with the television show.  Who do you hope to see seated at the judges’ table for Season 14 of American Idol?  Do you want Jennifer, Keith, and Harry back or would you prefer new judges?  Let us know what you think I the comments below.