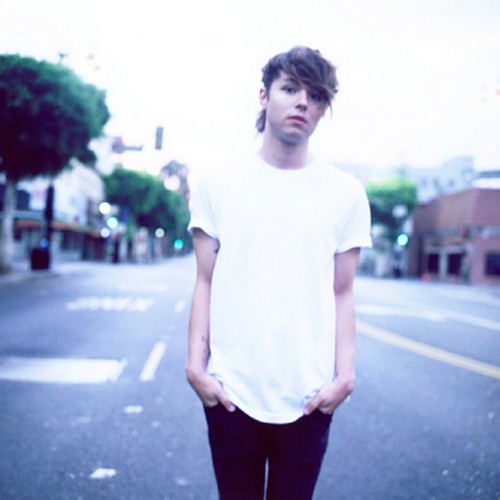 Jordan Witzigreuter was just doing what he enjoyed most when he entertained family and friends with basement performances of his personally written music. Little did he know that what started as a creative outlet would lead to performing in front of thousands, getting noticed by Pete Wentz from Fall Out Boy, touring with bands including The Wanted, Carly Rae Jepsen, Cher Lloyd, Breathe Carolina, We the Kings, Allstar Weekend, and Boys Like Girls! But it did, and now The Ready Set will be one of many popular bands performing on the Vans Warped Tour this summer!

The mega-talented Jordan sat down for CTL to share some of his upcoming projects as well as dish on some personal information as well. We asked the Indiana-born Jordan about his latest album, The Bad and the Better (available on May 27th on iTunes), and how it differs from his previous albums. Jordan shares, “I think my music has gotten better. Over the past couple years I have been able to work with well-known artists and write with well-known people. It has helped me to edit my own work…to make sure the best parts of the song stand out.”  The album is personal to him as Jordan explains that he does use his own personal experiences as fodder for some lyrics. I asked Jordan how he came up with the name The Ready Set.  As a solo act, Jordan shares that, “I didn’t want to use my name. It is hard to pronounce and I didn’t want to be labeled as a pop star.” Though Jordan plays many instruments, his album is mainly electronic. When he tours, he has a band that travels with him. He says The Ready Set name came from “never forgetting to be ready and to go after what you want.” He surely has done just that! The Bad and the Better is his third professional album with prior hits including “Love Like Woe” and “Young Forever.” We asked Jordan to tell us his favorite song on the new album, which had to be a tough question since the entire album is filled with catchy hits that you’ll remain singing hours after you’ve listened to them. His personal favorite, however, is “Are We Happy Now?”

Being on the Vans Warped Tour is quite an accomplishment with lots of amazing artists. We asked Jordan who he is most anxious to see performing live. He tells us he is very excited about Breathe Carolina among others. We wondered about his favorite artists overall and who he listens to when he’s not working. Jordan tells us, “I grew up listening to punk but then after I started listening to a band with a softer vibe, Copeland, I really started getting into them. It is one of the first bands I really got into. I am inspired by many things and have my ears open to everything—all types of music.” Jordan and his girlfriend share an admiration of Paramore’s Hayley Williams as well. If Jordan could choose any artist to collaborate with, however, it would be Prince. Sadly, he isn’t so sure that will ever happen, but he tells us, “I am always open to working with whoever.” Jordan believes he is able to learn from other artists so he’s always enjoyed collaborating and working with others.

Speaking of other artists, we asked Jordan about that little ode to Taylor Swift, “For the Better” that he wrote not long ago. Jordan tells us, “I actually wrote the song as a joke about how everyone gets so up in arms over celebrity relationships.” Wondering whether or not the song about Swift and her ex Harry Styles got the attention of the relationship-challenged chanteuse, Jordan tells us that Taylor did respond positively to the song that quickly went viral within hours of Jordan posting it.

You may wonder what Jordan does in his free time. We wondered about that, too! So, of course, we asked Jordan for the details on his free time. Jordan tells us that he enjoys running, playing with his dog and cat, and watching some current and past favorite TV shows Breaking Bad and House of Cards. Jordan also designs the graphics for items sold through the band’s site, The Ready Set.

Be sure to check out The Ready Set’s latest album The Bad and The Better on iTunes where you can pre-order now or purchase on May 27th when it drops. Stay in-the-know by following The Ready Set on Twitter, Instagram, and Facebook. The songs on the album are infectious and will surely have you singing and dancing along. We are loving the album and are sure you will too! Thanks to Jordan for talking with us and sharing so much with his fans!

How to Become a Teen Fashion Maven