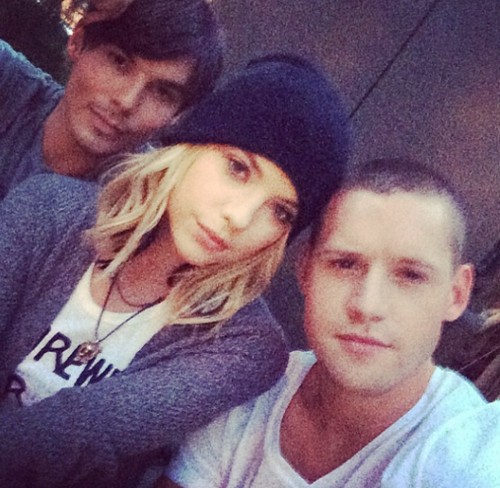 The Season 5 Premiere of ABC Family’s addictive drama Pretty Little Liars is set to air on Tuesday, June 10th.  Pretty Little Liars spoilers are already starting to roll in and we can’t help but notice Marlene King and her writing team are setting up one of the hottest love triangles … ever.

Tyler Blackburn played the part of Hanna Marin’s (Ashley Benson) boyfriend Caleb Rivers for basically the first three seasons of PLL.  However during Season 4 of the series he left the town of Rosewood and headed over to PLL spin-off Ravenswood for a grand total of eight episodes before the new drama was cancelled by ABC Family.

While at first Haleb supporters were devastated to see Caleb and Hanna go their separate ways, newcomer Luke Kleintank’s character Travis Hobbs quickly transformed into Hanna’s new love interest.  And, by the Season 4 finale Travis and Hanna were adorable together and we had all nearly forgotten about Caleb.

A few days after the Season 4 finale of Pretty Little Liars aired, ABC Family announced that Tyler Blackburn (Caleb Rivers) would be returning to PLL during Season 5, and will make a grand entrance during the monumental 100th episode.  So, what about Travis and Hanna?  Is She going to kick Travis to the curb as soon as Caleb returns from Ravenswood?  I can’t be the only PLL fan who is semi annoyed by all of this.  Blackburn had no problem leaving PLL when he was offered a spin-off, and now that his spin-off tanked he’s going to waltz back onto the show and screw up Hanna and Travis’s relationship?

It’s going to be interesting to see how the Travis-Hanna-Caleb love triangle will shape up this summer on Pretty Little Liars Season 5.  Ashley Benson shared a photo on her Instagram of herself snuggled between Tyler Blackburn and Luke Kleintank, and captioned it “love triangle” so we already know it’s going to be a huge part of Season 5.  What do you think PLL fans, should Hanna Marin choose her ex Caleb or her new beau Travis? Let us know what you think in the comments below!

If you want more PLL Spoilers for season 5 we have more, right here.