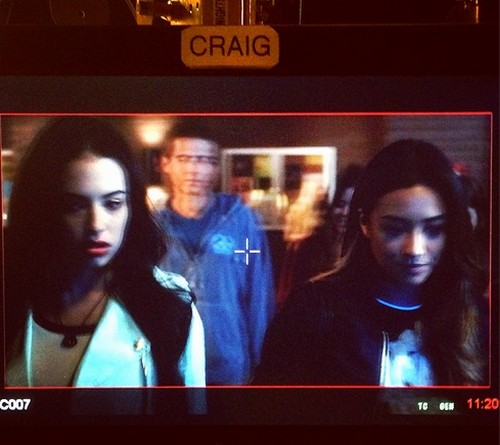 Dun dun dun. Are we about to see Emily’s new love interest, to be introduced in Season 5 of Pretty Little Liars? There’s no denying that Shay Mitchell is electrifying on screen, so anybody they planned to match up with her would need to have the same screen presence – and it looks like they may have succeeded. Behind-the-scenes director Norman Buckley shared a blurry Instagram picture of Shay Mitchell and Chloe Bridges walking alongside each other, with Shay’s Emily sporting a smile. The character that Chloe plays is named Sydney Driscoll, and she’ll reportedly be an addition to the Rosewood swim team, a new student, and a new friend to Emily – and perhaps something more?

Her first appearance is reportedly in the third episode of Season 5, but she’ll also have a large part in the fifth episode, which also marks the 100th episode of the entire show. Usually, television shows always save special guest appearances and story lines for its 100th episode, so if Sydney makes an appearance, you can bet that she’ll have an important role to play.

Shay recently spoke about Sydney’s appearance on the show, telling E! Online that it wouldn’t necessarily change the dynamics of Emily’s relationships with Paige and Allison. She states, “For the Paige and Emily fans, I would say to hold tight. Nothing’s ever said and done. And I will say to the Emison fans, you never know what could happen again. So stay tuned.”

Whatever happens, at least we know that Chloe Bridges is strong actress with plenty of credits behind her. She previously starred in The Carrie Diaries, Nightlight, Mantervention, and 90210. So even if she does end up becoming Emily’s new love interest, at least the dynamic will be interesting.

How to Choose a Hair Stylist in a New City