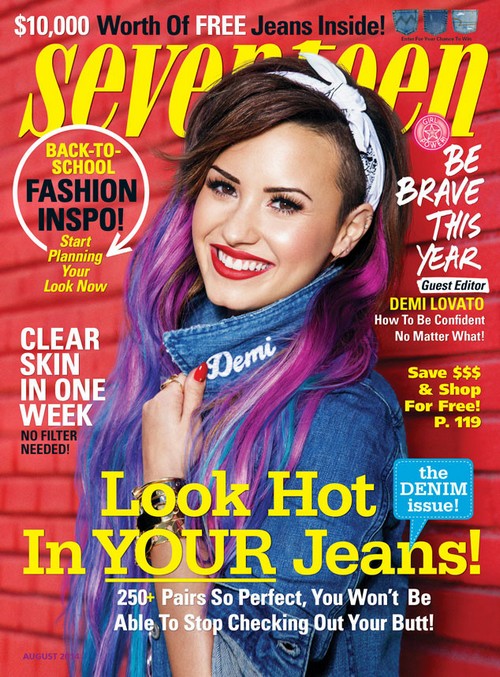 Demi Lovato is about as real as celebs in young Hollywood can possibly get.  She has already battled her share of inner demons- everything from addiction issues to self abuse- and freely discusses these things as a way of helping others who are struggling to feel a little less alone. Demi also gets that not all problems are just fixed with the snap of a finger. Some issues need daily fine-tuning and that is what a good deal of her life is now about. Tweaking things until they feel right even if only for today.

Demi graces the August issue of seventeen magazine which hits newsstands on July 1st and she is also guest editor for the issue. Her interview is chock full of info on the rising star and it’s clear that a lot of that soul searching that she has done has really paid off. She says that part of the reason that she gives back to people in need is because it’s good for her soul. If she lost her own level of fame tomorrow then she’s still left with her soul and all is not lost.

Demi also discusses the twitter wars that a lot of celebs find themselves tangled in. Girlfriend has found a way to deal with the comments that people make without going off the deep end in a reactive way.  Demi says, I’m impulsive when it comes to fighting back, but I’ve learned to reel it in. Tweeting without thinking does more harm than good. So take a second. Journal what you want to say, and then if you still feel the same later, that’s when you can tweet it.”

That’s the kind of advice a lot of us can take, right? How often do you find yourself reacting to something someone says on Twitter and just wanting to let them have it?  Pretty often I’ll bet!  What are your thoughts on Demi? Do you guys respect her more for all of the stuff that she has already gone through in her life? Tell us your thoughts in the comments below!