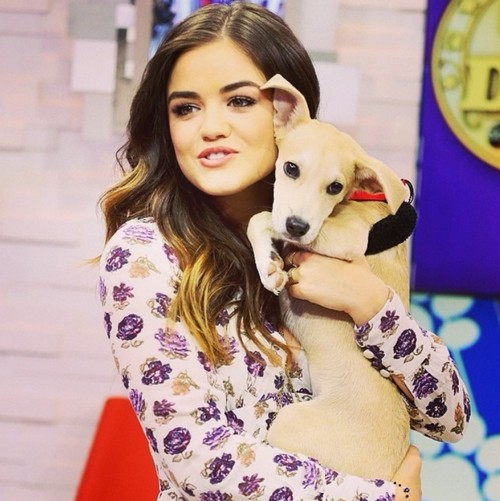 Lucy Hale is one of the hottest young celeb’s right now and as her career continues to skyrocket she has decided that she has no real time for love. Lucy and Joel Crouse were first spotted getting cozy at a Laker’s game back in May and they did little to hide their blooming romance in the weeks that followed. Just last week she posted a photo of the happy couple on their shared birthday- June 14th. But somewhere between now and then things came to a screeching halt. US Weekly confirms that the couple has split.

Sources close to Lucy say that she had to prioritize and that work simply came first. She has been working a lot on location with Pretty Little Liars and that meant even less time to devote to Joel. She ultimately decided that the distance between them wouldn’t work and pulled the plug on the romance just as it was starting to get going. Supposedly it’s not personal, Lucy simply knows that she’s only getting busier with work and it’s going to make any relationship impossible right now.

Lucy’s first album entitled Road Between just dropped a few weeks ago and just the other night she performed at The Grand Ole Opry, something that has been a life-long dream for the 25-year old star. It’s pretty obvious that her career is only on the upswing, right? Do you blame Lucy for ending her relationship with Joel? Do you think the timing was just really bad or is it also that she knew he wasn’t the right guy for her? Tell us your thoughts in the comments below!

John Green’s “Looking for Alaska” Headed to The Big Screen