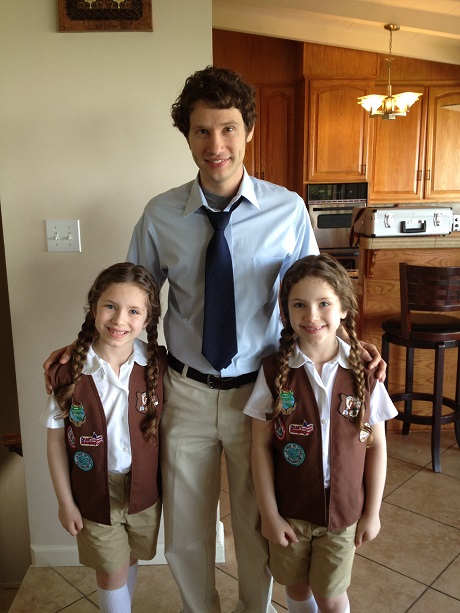 The absolutely adorable D’Ambrosio twins, Bianca D’Ambrosio and Chiara D’Ambrosio, took time out of their über busy schedule to chat with Celeb Teen Laundry about their recent big screen debut. In the award-winning indie film, Feeding Mr. Baldwin, directed by Will Prescott, the twins play Girl Scouts and are truly a class act.

Many remember the lovely ladies from their long stint as Summer Newman on The Young and the Restless, but they have been quite busy ever since and have made several guest appearances on hit shows, including Legit, Criminal Minds, See Dad Run, and Parks and Recreation. Bianca and Chiara have also worked effortlessly to battle bullying, and they even have an anti-bullying song and video called “Let Your Light Shine” to support their efforts.

With the recent release of the dark comedy, Feeding Mr. Baldwin, on VOD and iTunes, we just had to ask the girls for details about the film. We did just that, and now Celeb Teen Laundry can share Bianca and Chiara’s excitement about the movie with you!

While the girls have had the opportunity to work alongside many wonderful actors and actresses, we asked the girls who they’d LOVE to work with, if given the opportunity to pick anyone from the industry to be their co-star. Chiara says, “Scarlett Johansson, for sure!” Bianca says, “Jennifer Lopez because she is a singer, a dance, and an actress. I would love to do an action movie with her!” Now that would be a movie we’d love to see as well!

The twins don’t limit themselves to movies, however. And, as their devoted fans already know, Bianca and Chiara have dabbled in many areas within the industry, including television, production, singing, commercials, movies, and even music videos! We asked the ladies which role they prefer most. Chiara says, “I love all the activities we do, especially acting because you can be any person you want to be.” Bianca says she wants to go beyond the basic “triple threat” to become “a SIX or SEVEN threat!” For now, she most enjoys music, acting, singing, and directing. She loves acting because she says, “I feel like it helps me grow as a person.”

Viewers are in for a treat when they see Feeding Mr. Baldwin, especially the big ‘cooking-fighting’ scene, which is the girls’ favorite. We’re not giving any more details, as we promised not to give any spoilers, but we promise you won’t be let down! The fun wasn’t limited to the film, either. Bianca shared a funny story that happened in wardrobe after she was asked about crayon drawings on the water bottles, one of which she was holding. She dropped the water bottle and water went everywhere. Everyone sort of paused and gasped as if it was a glass bottle that had shattered everywhere, but NOPE—this was thankfully just plastic, so aside from water scattering everywhere, it wasn’t too bad and made for a funny story the girls could share with us!

With such a busy schedule, we asked the girls about what they like to do in the little free time they have. Both enjoy hanging out with friends at their house and swimming. Chiara also enjoys “dancing, shopping, and going out for yogurt,” while Bianca adds that she also likes, “watching movies on my iPad, playing the piano, and writing music in my songbook.” She adds, “I have so many pages already in my songbook,” as she loves to write music. Wow…is there anything these girls cannot do?

The girls also shared how much they enjoyed working with director Will Prescott, adding, “Will is so nice. He gives really good direction and is so sincere.” We’re sure Will has plenty of wonderful things to say about Bianca and Chiara as well. Be sure to check out our exclusive behind-the-scenes pics that the girls shared with us; they can be found in the gallery below.

We always love talking with the D’Ambrosio twins, who are genuine, personable, sweet, and positive! Be sure to check out Feeding Mr. Baldwin. To see what Bianca and Chiara are up to next, be sure to follow them on Twitter, and “Like” them on Facebook.

Breaking Up Hurts: 5 Tips for Getting Over Your Broken Heart