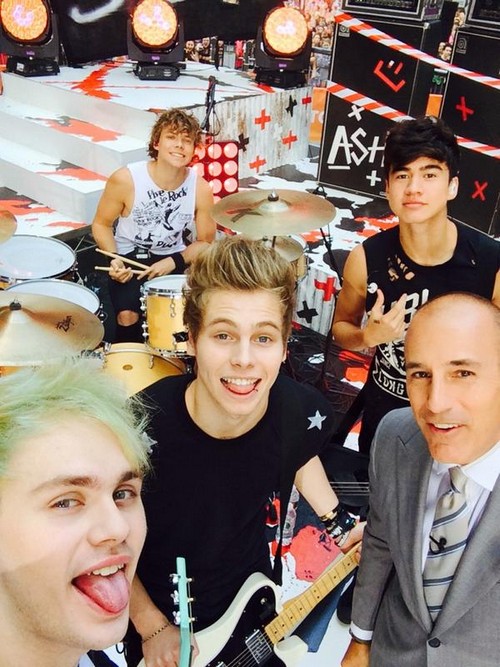 If you are a teen or happen to live with one then chances are that you’re at least slightly familiar with 5 Seconds of Summer, an Australian pop/punk band that drops its’ self-titled album today. The boys showed up on The Today Show’s Toyota Concert Series this morning but long before their plane touched down on U.S. Soil girls were lined up to see them. Seriously, the first fans arrived on 49th Street in NYC last Thursday and had been camped out for days waiting to see their new faves up close!

Eventually Luke Hemmings, Michael Clifford, Ashton Irwin and Calum Hood took to the stage in the plaza and performed “She Looks So Perfect” and “Amnesia”. Of course their fans went absolutely nuts as they wrapped around 10 NYC blocks hoping to catch a glimpse of the hottest band to come from Down Under in years. Somewhere in the audience was a huge cut out of Will Smith which Al Roker zoomed in on. It turns out Will Smith is % SOS’s very favorite performer and they’d kill to work with him.

If Will is looking to gain brownie points from a younger audience he might want to consider a collaboration! In the meantime fans will just have to enjoy the bands debut album. Have you listened to it yet? Do you have a favorite track? How do you think 5 Seconds of Summer measure up to the band that they have opened for, One Direction? Will they be nearly as popular? Tell us your thoughts in the comments below!