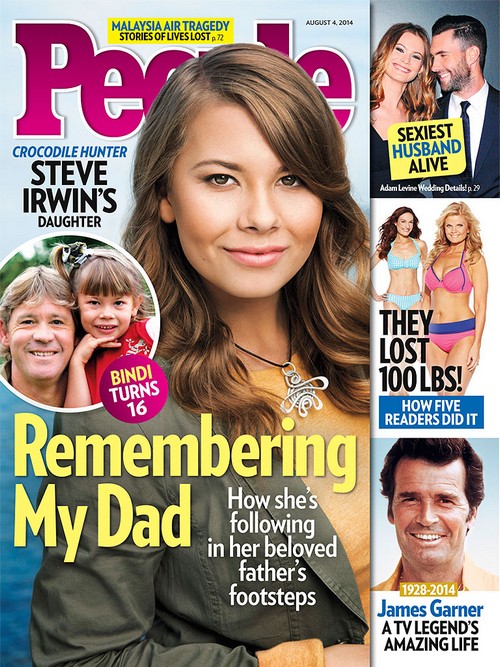 I think everyone was a bit sad back in 2006 when “Crocodile Hunter” Steve Irwin was killed in a stingray attack. It was one of those things that you knew could happen but for whatever reason still didn’t expect it to. He was a pro and in a moment we were all reminded that the animals were still ultimately in control of him. Bindi Irwin was only 8-years old when her father died and now she is finally starting to talk about her loss a little bit.

According to an interview in the Aug. 4th print edition of People Magazine Bindi says that being told that time heals all wounds is the biggest lie ever, because it doesn’t. Sure, she and her family have moved on but there is a sadness that remains. Her 10-year old brother Robert studies their late fathers videos with intensity and Bindi likes to read all of the letters that he sent home while traveling the world. Her fathers own words bring more comfort than anything else can.

Bindi is also working as a youth ambassador for SeaWorld because she believes it’s a great way to help keep her fathers work and memory alive. She also helps to organize her families yearly crocodile research trip because it was an event that her father loved. While giving back is important Bindi still does little things to feel her father’s presence. Steve last his hand prints in concrete right outside of the family home in the Australia Zoo. Both Bindi and Robert like to put their hands in the prints to connect with Steve.

It’s cool to see Bindi growing up and turning into such an amazing young woman in spite of her hurt, isn’t it? Tell us your thoughts in the comments below!