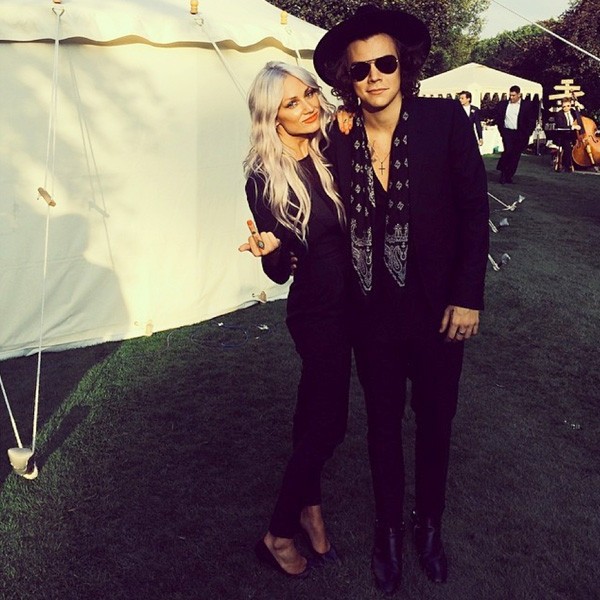 He was dressed entirely in black–slacks, dress shirt that was unbuttoned half way down his torso, with a matching vest, as well as a hat, sunglasses, and a bandanna hanging around his neck. He also wore some rings and a cross necklace.

Honestly–I think that this look was very disrespectful to the bride and groom, and I don’t think it matters if the bride approved or not. There is a way to dress when you attend an event, such as a wedding. His look wouldn’t have been out of place at all if it had been a red carpet or a concert. That’s when he can do his thing, and look hot all he wants.

But it’s a wedding. The other band members were dressed properly–why couldn’t he do that? This isn’t any different, to me, than when Lady Gaga showed up to her little sister’s graduation as ‘Lady Gaga’–not as ‘Stefani Germonatta’…who she really is. He’s showing up as ‘Harry Styles’ to a personal, intimite, fun event, when he should just be ‘Harry’.

And honestly–he should be old enough to figure that out by himself. No one should have to pull him aside and tell him to dress a little more subdued for a few hours, so the attention can be on the bride and groom.

No one wants to see someone’s nipples at a freaking wedding, Harry.