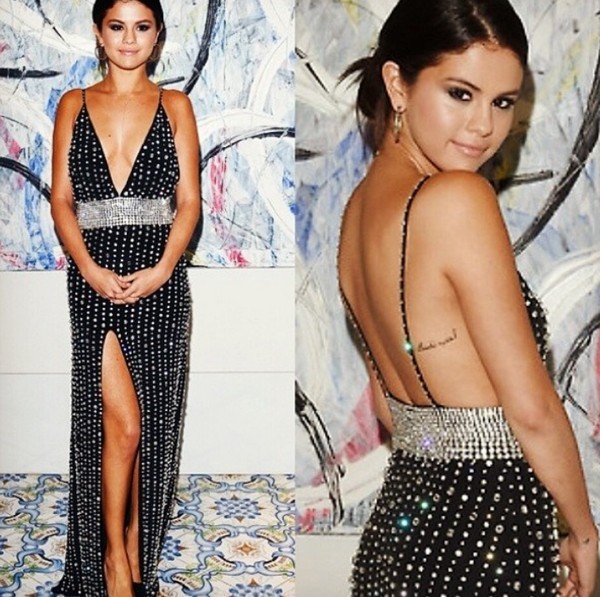 The dress looks cheap. By itself, without all of the embellishments, it would’ve been a great look, especially if she had worn some kind of a color in her accessories. But with the embellishments? Good God. They look like they were super glued to the gown. And the jewels themselves look like they’re cheap plastic. And now I’m wondering how she sat in that gown, without it hurting her butt.
I don’t necessarily like the cleavage in her dress–because I think this style looks better on women with smaller breasts–, but I do like the chain that she is wearing. But the belt is just ugh…..looks like an obviously cheap and/or fake diamond stud choker. And it doesn’t go well with the other jewels on the gown.
Later in the evening, Selena changed into a different dress–this one, I think, meant more for partying and having fun in.
Good God.
First off–the media is saying that the dress is black, but it looks more dark blue in some pics, but I’m not sure if that’s just the lighting or what. But this looks is a hot mess, from head to toe. It’s just too busy.
I do love the one shoulder strap/neckline of the dress. I like the color of it, and that’s about it. The shoes don’t match the dress OR the leopard print jacket. Her hair is pulled back, and too severe for the look that she’s trying to pull off. The bottom half of the dress is confusing. It looks like they tried to be artsy with the bottom half the dress, but it just falls apart. It doesn’t match–it looks like two different halves of two different dresses.
I wish she had curled her hair, let it down, and wore some huge, chunky earrings. That would’ve been great.
But her her makeup was good, as always.
Share FacebookTwitterPinterest