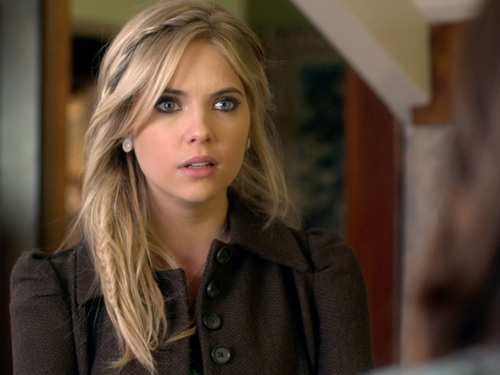 The key to any really good drama usually involves a love triangle. This formula is tried and true and has been used in film, soap operas and prime time programming for decades now. When one primary character has to make a huge choice the fans end up divided and when love is involved, well it gets messy. On the 100th episode of Pretty Little Liars Hanna was reunited with Caleb something that many of you guys have been hoping would happen. Tyler Blackburn, the actor who portrays Caleb is back for good after a quick spin over on Ravenswood and immediately Hanna is distracted by him.

On tonight’s episode her distraction is going to continue in a big way when she accidentally forgets all about date night with Travis. Yeah, forgetting that you’re supposed to spend quality time with your guy is never a good sign and Travis realizes almost immediately that Hanna is preoccupied. Needless to say it leads to a pretty big fight between Hanna and Travis which will all go down on tonight’s episode.

As for Caleb’s breezing back into town, look for him to bring a lot of drama with him. According to The Hollywood Life, Blackburn insists that his character is in a pretty dark place which is why he was standoffish when he first ran into Hanna again. Of course he’s going to head down a rocky path. Characters rarely return to the canvas without a crazy story to tell, right? Do you think that Hanna will go back to Caleb- if he’ll have her? Tell us your thoughts in the comments below!