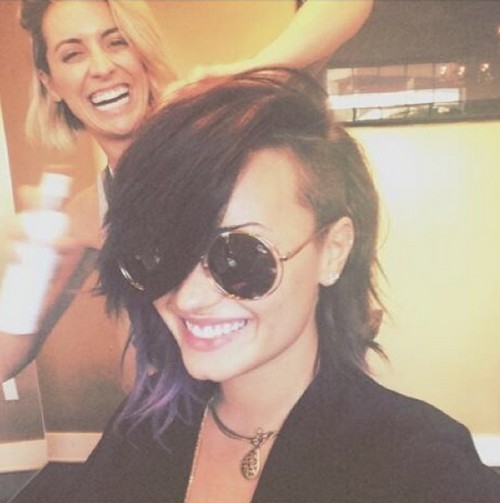 She’s of course talking about her fall out with Selena Gomez–because OF COURSE. She has nothing else to talk about. And she’s young. So everything is SO serious that she has to talk about it in interviews years later.

^^^^^^^^^^This was my original opening, when I read the title of the US Magazine story. When I actually read it, I was pleasantly surprised, because I kind of have an irrational dislike for Demi Lovato. I don’t know why–it’s not anything she’s done, said, and I think that she’s really great about being open about her struggles with body image, etc. But she just kind of annoys me. It might just be because my little sister constantly plays her ‘Heartattack’ song.

But anyway–Andy Cohen asked her about Selena Gomez, and had this to say–“I plead the sixth if that’s in the game. I think its just one of those things where people change and people grow apart.”

THANK YOU. Now, that’s not to say that she hadn’t gotten her twitter digs in before–allegedly tweeting and deleting, “Swimming away from the bulls–t bye b—h.”. Right after unfollowing her on twitter–this was last month.

But I do hope that she continues on like this. Don’t start any stupid twitter feuds. Especially since Selena didn’t tweet anything back, or otherwise respond, publicly. I don’t understand why young celebs think that because they get a little attention, that that means that they have a good career. They don’t. They get their fifteen minutes, and then, eventually, they fade into the background–because instead of working and focusing on their careers and putting out a product (film, tv show, album) that people will pay for, they’re too busy putting all of their energy into a twitter feud. Just silly.

So I hope that Demi just focuses on herself, and her career. No one needs unnecessary drama in their lives.