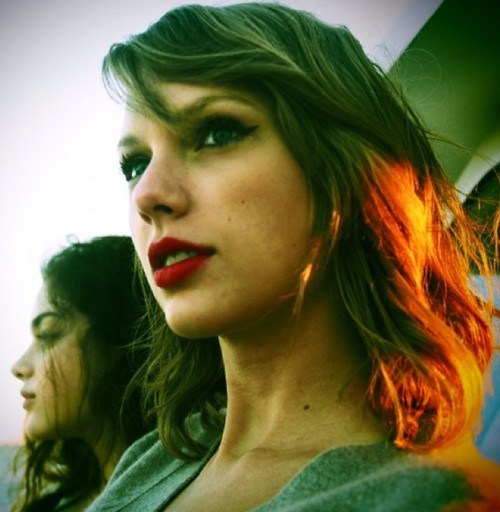 I wonder if Seth Meyers was subtly shading Taylor Swift, when she went onto his show, Late Night. Because all I’ve been seeing of Taylor in the past few months is paparazzi shots of her either out and about, all dressed up, or going to the gym. Basically she’s (from a gossip standpoint) acting like a D-list celeb that relies on getting pap’d at the gym to have some semblance of a significant celeb profile.

I say this because he pulled paparazzi pictures of her (gasp!) going to and from the gym. He said “What is going on? Tell me how this works?” And Swifty responded with “That is how everyone looks when they come out of the gym. I like to bring a change of clothes.”

She then went on to say, “I don’t! I really don’t! Because my hair is short now and it’s a lot easier to just brush it. Also, you know, I think New York is one of those cities that feels worth dressing up for, if that makes any sense. I just feel like when I walk out onto the sidewalk in New York, I have to just try a little harder. It’s not like an extra hour at the gym. I read that somewhere and I was like, ‘That’s ridiculous.'”

Um, no girl. People do not look like they just stepped out of a Kennedys-At-Camelot catalogue when they leave the gym. If we’re lucky, they’ve showered and smell decency. But I don’t blame her. It’s better to be seen as a wanna be Stepford wife who farts lavender flavored wallpaper , complete with all the trappings, than to be known as the girl that looks like she’s allergic to soap and homeless. Especially a celeb.

And later she talked about attending awards shows, saying, “I used to get really nervous at awards shows because, seemingly, they’re a huge pressure cooker. And everybody seems to be sitting there trying to look more unaffected by being at this awards show than the next person next to them. That can have an effect on you, and so you’re in the front row and you’re sitting there like, ‘Maybe I should sit here like this. A couple years ago I just decided, ‘No. This is the coolest concert you could ever go to. This is like all these incredible acts playing their biggest songs and I get to be front row and I’m going to dance during this because I feel like it—and not because it looks cool, because it doesn’t.”

One of the things that I do like about Swifty is that she does ‘rock out’. She’ll headbang and dance at awards shows–she knows how to have fun. I’d be embarrassed, as I have NO rhythm whatsoever, but she doesn’t care. But I laugh when she talks about being nervous at awards shows, because Swifty is the WORST loser in the world. I still remember her face after she lost the golden globe to Adele a few years ago. She’s used to winning everything. So while she’s trying her best to rock out, she needs to work on her loser face. Girl, you can’t win everything.