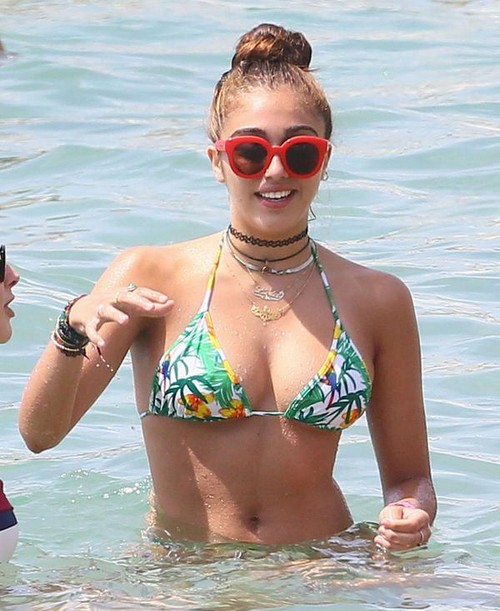 I am, once again, reminded that I am so glad that Lourdes Leon is going to a college that is HOURS away from me. I can’t take this much excitement in my quiet life. There was a huge uproar in my town when people thought Eminem had come for a drink at the local bar (that was two streets away from me).

So Lourdes is in the South of France, swimming, accompanied by her friends, and her mother’s boyfriend. Meh. I will say this for Madonna–she has JLO beat. At least Madonna picks the hot, younger men who know where their place is in the line up (hint: it’s not ‘head choreographer). Where JLO finds those fugly, uppity dudes, I don’t know. But she needs to get some tips from Madonna.

I have mixed feelings about Madonna’s boyfriend spending time with her kids. On one hand–it’s Lourdes. She’s seventeen. She knows what’s up. She probably even laughs at her mom (I would), and her mom’s hot pieces. On the other hand–we know that this isn’t serious. And one of the things that a mother shouldn’t ever do is bring a bunch of men around their young kids. If I had a boytoy, I wouldn’t ever let him near my kids, especially if they’re not even out of the house yet.

Hopefully Lourdes will, at the very least, figure out what she wants and doesn’t want from her mother’s example. I’m just wondering about the poor boy that’s going to be her boyfriend from college, and him having to meet Madonna. I don’t even listen to Madonna’s music, and I would be a mess if I had to do that. Especially in that capacity.