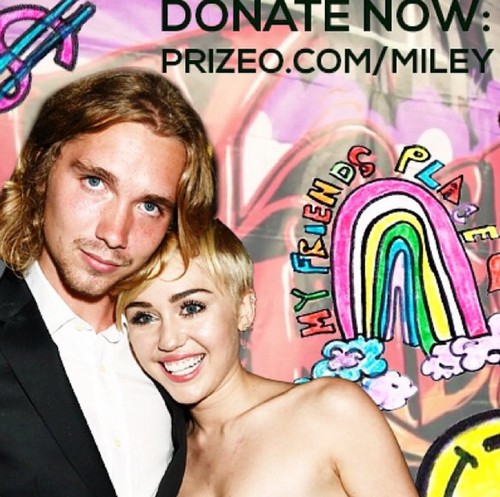 His name is Jesse, just an FYI.

I guess Miley Cyrus wanted attention BOTH years she attended the VMA’s, but this time, it was for a good reason. No twerking was even necessary.

Okay, so Miley won the Video of the Year Award for Wrecking Ball (I guess licking that hammer cinched the deal), and instead of going up to accept the award, she sent her ‘date’, 22 year old Jesse to make a speech about this homeless charity, My Friend’s Place.

Here’s what he said:
“My name is Jesse. I am accepting this award on behalf of the 1.6 million runaways and homeless youth in the United States who are starving and lost and scared for their lives. I know, because I am one of those people. I’ve been an extra in your movies, I’ve been an extra in your lives. Los Angeles has the largest population of homeless youth in America. Though may have been invisible to you on the streets I have a lot of the same dreams that brought many of you here tonight.”

I look at this with two sides of myself. There’s the human in me that thinks that this is great. Millions of people have now heard about the My Friend’s Place charity organization–I’d certainly never heard about it. This young man, Jesse, got to stand up in front of millions of people (figuratively) and be given a voice to talk about something that he has personally experienced and this is dear to his heart. And people had to listen. He’s probably never experienced something like that before–very few of us will. So I think that it’s great that Miley did this–especially since she does live in LA.

Then there’s the gossip side of me. It’s Miley. And the thing that I’ve learned the most about Miley over the past year, is that Miley LOVES attention. That’s not to say that she doesn’t have a good heart–but she loves attention. And she knows exactly how to get the most attention. It’s why she played media games about whether or not she was still with her ex-fiance, Liam Hemsworth, for months, and it’s why she waited to announce that she and Liam had broken up (it was obvious) until she dropped her single, Wrecking Ball to the general public. Complete with crying, emotional live performances afterwards.

And then there’s the fact that this VMA appearance (although she didn’t perform this time) was a complete 180 from the last one. Instead of getting attention for being a completely sloppy performer (and that tongue–that’s the first thing my mom asked about–“What’s wrong with her tongue?”), and twerking her flat, out of shape butt everywhere, she’s getting attention because she wanted to bring awareness to a charity. Good.

I just read on Look To The Stars that she supports 39 different charities. That’s great. I wish that she would talk and tweet more about those charities and causes, but every little bit helps. I can’t really hate on her for bringing Jesse to the VMA’s, because everyone wins. She got attention. He (and the charity) got attention. Everyone is happy.