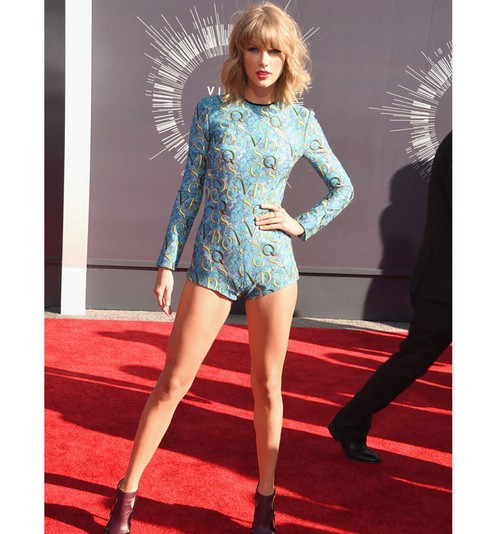 WOW. That’s all I can say. This is a huge departure for Taylor Swift. In the past year, I feel like she’s grown up in her fashion on the red carpets (by stepping away from the princess-y, prom gowns that she usually goes for), but I never would’ve expected her to come to the VMA’s wearing that.

Okay, nice things first. It’s not a princess gown. It’s fun. I love the color, as it goes perfectly with her skin, and doesn’t wash her out (like Elle Fanning was, in her pale, pink princess-y looks). And where is it appropriate to wear a romper, to try and wear something fun or costume-y? At the VMA’s, of course.

I don’t really like the pattern of letters on it, but it’s okay. It doesn’t detract or attract anything from the look. The shoes don’t really go with the outfit, but it’s not matchy-matchy either, so it works. But OMG–she’s got a massive cameltoe…..which is exactly why I would’ve thrown this outfit out the minute I saw that. That’s basically all I see when I look at the outfit. I can’t unsee it. And my last criticism is how short it is. Taylor is so lucky that she is tall and has a little butt (and breasts). Because girlfriend would be called all sorts of things (and cute would not be one of them) if she was a lot more…..endowed than others (Nicki Minaj, anyone?).