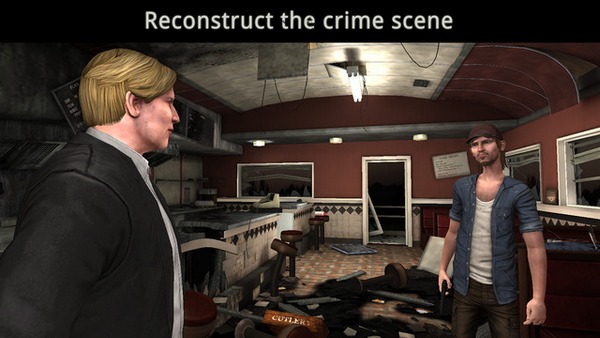 The Trace: Murder Mystery Game was the Editor’s Choice Game on the Apple App Store several weeks ago. Identified as “an immersive murder mystery puzzle adventure game that will pit your wits against a baffling crime that needs solving and a shell that needs answers”, The Trace harks back to the point-and-click adventures of yesteryear, much in the vein of Broken Sword and the ghastly CSI game series.

The Graphics – 5/5
The Trace is an attractive game with a mysterious ambiance.The beautiful graphics come to life on the iPad, especially the realistic facial features, the light-flares, the dark rooms and the broken cell phones. It’s like playing Cluedo without pens and crazy family members.

The Controls – 3/5
My biggest irk with The Trace would be the clunky, counter-intuitive controls. Double-tap here, single-tap there, and before you know it you’re in the same room you were five minutes ago. The controls are supposed to be “physical”, e.g. slide down to open a door, slide back to open a drawer, spin a screwdriver, etc. It takes more time to spin the bloody (no pun intended) screwdriver than it takes to exit to the main menu. One doesn’t incur any penalties for “messing up”, except in certain puzzles where a process is repeated until it is correct.
A cumbrous repetition doesn’t bode well for an “immersive experience”.

The Gameplay – 3/5
The point-and-click genre appeals to a certain niche; I, for one, adore point-and-click adventure games. Unfortunately The Trace points more than it clicks. The “clues” are extremely easy to find (you just connect the dots) and the crime scenes are virtual scratch-patches. Then there’s the “new lead pop-ups”… Clicking on a clue brings up a “new lead” dialogue, which not only describes the clue in a police-esque language, but also leads (no pun!) you to a sub-menu of question marks and slide-the-clue slots. Each new lead leads (no pun…) to a question, and each question leads to an insert-lead-here slot. Once a question is answered, a cut-scene shows how and why it happened. It’s cute, fun and interesting. But that’s all there is to it; nothing more, nothing less.

The Overall Experience 3/5
The Trace isn’t a groundbreaking game, but it is enjoyable nonetheless. And it’s rather addictive. It won’t keep you up at night, a la Pocket Planes, but it will offer you an interesting albeit irksome experience.

You can download and try The Trace by clicking here or finding it in your iTunes store.