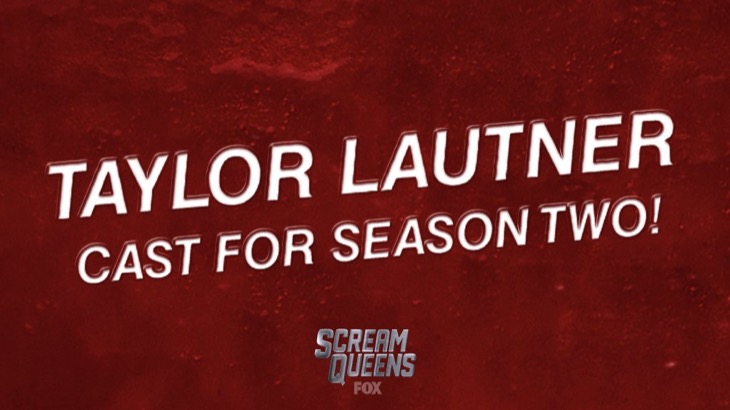 Brace yourselves Twihards, because we have the greatest news EVER! According to an official report from TV Line, Taylor Lautner (aka Jacob the super hot werewolf) has joined the cast of FOX’s hilarious TV show ‘Scream Queens.’

In case you were living under a rock and missed Season 1 of ‘Scream Queens,’ the satirical horror comedy took place at a sorority house, Kappa Kappa Tau, where a serial killer was on the loose. ‘Scream Queens’ was a bizarre mixture of comedy, slasher movies, and amazing guest stars. Ariana Grande, Nick Jonas, and Chad Michael Murray were just a few of the famous guest stars.

‘Scream Queens’ spoilers tease that Season 2 of the FOX show will premiere on September 20, 2016. According to reports from FOX, Season 2 of the series will take place at a hospital, rather than the college campus. Despite the major change in setting, some fan favorites will be reprising their roles – like Bella Thorne, Lea Michelle, Jamie Lee Curtis, and Keke Palmer.

According to the ‘Scream Queens’ spoilers from TV Line, Twilight star Taylor Lautner will be playing the part of Dr. Cassidy Cascade. Apparently, Dr. Cassidy has a bizarre medical disorder of his own, and he is a suspect in the recent string of murders at the hospital. (Call us crazy, but it sounds like he might be a member of the werewolf family again!)

Oh, and one of the VERY lucky members of the ‘Scream Queens’ cast will be playing the part of Taylor Lautner’s love interest. ‘Scream Queens’ spoilers tease that Billie Lourde (aka Chanel #3) will hit it off with the mysterious Dr. Cassidy.

So far there is no news on how many episodes Taylor will be starring in. Although, last season we were a little upset when they kept killing off all of the super hot guest stars (cough, Ariana Grande). Here’s to hoping Taylor makes it past Season 2 Episode 2!