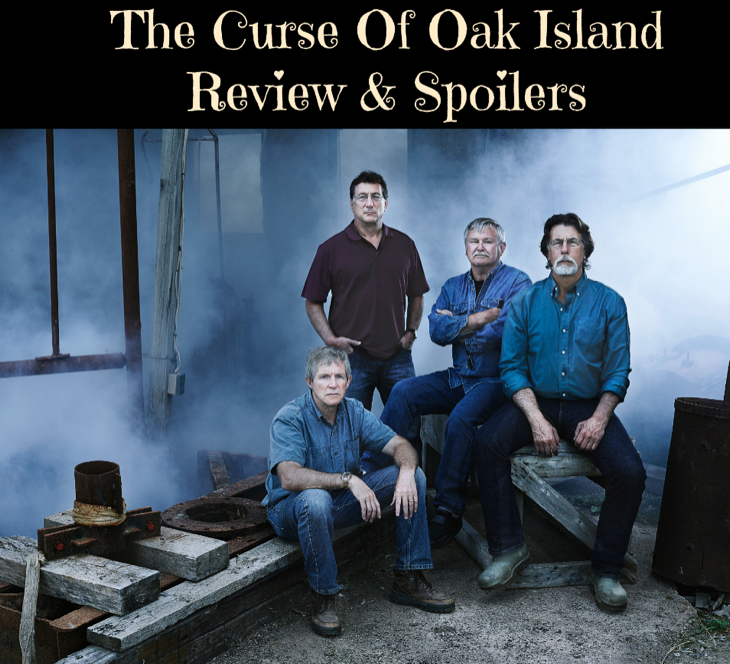 Legendary wreck diver John Chatterton is among a select group of individuals who have explored the underwater remains of the Titanic, the RMS Lusitania, and the Andrea Doria. Last night viewers watched as he executed another dangerous dive on The History Channel’s docu-drama, “The Curse of Oak Island.” Did he find the elusive pirate chest rumored to be at the bottom of the narrow underwater tunnel known as 10-X?

For over 200 years the island’s fabled artifacts, which include the Ark of the Covenant, the Golden Menorah and mountains of pirate gold, have lured countless explorers hoping to strike it rich. Franklin D. Roosevelt, John Wayne, and Errol Flynn are among the adventurers who have been unable to resist the lure of Oak Island’s rumored riches.

Now in its fourth season, “The Curse of Oak Island,” follows along as treasure hunters Rick and Marty Lagina pull out all the stops in an effort to reveal what the picturesque Nova Scotian island is hiding. In just a few short years they’ve poured millions of dollars into what they hope will be the discovery of ancient treasures and artifacts hidden on the woody, isolated expanse.

In episode 10, “About Face,” the Laginas and their team send Chatterton to the bottom of the 170 foot deep, 40 inch wide 10-X shaft to recover what a previous dive seems to have revealed: a shiny, gold-colored object. Could the purported shiny object be gold from a pirate’s chest, long ago hidden from sight?

After holding their collective breath, the team couldn’t hide their dismay when Chatterton surfaced empty-handed, prompting an incredulous Marty to issue an O.J.-inspired zinger: “If the box if gone, we must move on!”

Disappointed that nothing was recovered from 10-X, the team decides to investigate a mysterious boulder located at nearby Peggys Cove, a coastal village famous for its historic Peggys Point Lighthouse.

The team were surprised to discover that the roughly 18 foot tall rock, carved to look like a human face, is similar to a smaller carved rock back on the island.

Could this rock formation, discovered four years ago by explorer Terry Deveau, be connected to the treasure on Oak Island?

And if a connection does exist, why did someone take the time to execute both carvings and then leave them in separate locations?

After looking at the formation, Rick, who has been fascinated with Oak Island since 1965, makes an observation that further complicates this latest mystery.

Related: The Curse Of Oak island Overview – Why To Watch It

He believes that the rock carving looks like the face of Prince Henry Sinclair, a man with historical ties to both The Ark of the Covenant and the Golden Menorah.

It’s a well-known fact that the Micmac Indians who once lived in the area had contact with Sinclair, and it’s claimed that they actually came to worship him. Is this the clue that the team has been waiting for, a breakthrough discovery that connects all the dots and solves the mystery of Oak Island once and for all?

That question remains unanswered for now. But the rocks are clearly one more tantalizing clue to a centuries old riddle with no clear answer.

Legend says that seven must die before the Oak Island mystery is solved. In the past 220 years six men have died trying to wrest ancient riches from the island.

Will there be a seventh?

Before there is an answer, the team gathers back in the War Room, a small, modular building where strategy is discussed and difficult decisions are made. Marty informs them of a hard reality: this year’s money is starting to dwindle.

With financial constraints impeding their efforts, the team is forced to decide which of two upcoming projects deserves the last of their money. Should they use technology to blow out the muck from 10-X in the hopes of finding a pirate’s chest, or should they instead spend their reserves to dig a third exploratory hole at a site called the Money Pit?

The men can’t come to an agreement so Marty, the main financier, cuts the tension by observing that logic and emotion are both doing battle in the room, “just like Star Trek,” and everyone laughs.

Although Marty, an engineer and vineyard owner, insists that they don’t have the budget to do both projects, the team remains divided. “I’m in agony about what to do,” he says.

But after more impassioned discussion, an exhausted Marty reaches a shocking conclusion no one saw coming: “let’s go for broke!” he declares.

Reenergized by Marty’s enthusiasm (and deep pockets), the team excitedly turn their attention to excavating the 10-X shaft.

The team is motivated by a strong desire to find something that they can present to 91-year old team member Dan Blankenship. The former contractor has spent the last 49 years trying to find something of value on the inscrutable island on which he currently resides.

Dan was the diver who first claimed to have seen a box or chest-like object at the bottom of 10-X. More than anyone, he deserves an answer to this 200 year old conundrum, right?

Is Dan about to get the answer he’s spent most of his life waiting for? Be sure to watch next week’s episode, “Presidential Secrets,” to learn what the team discovers when excavation of 10X begins!

Previews from the upcoming episode tease that a recovered clue may corroborate Dan’s claim to have seen a dead body, as well as a chest, at the bottom of 10-X over 40 years ago.

If so, it will be the most conclusive evidence to date, and proof that Dan’s steadfast devotion to solving the mystery of Oak Island has not been in vain.

Tune in to The History Channel’s, “The Curse of Oak Island,” next Tuesday January 24 at 9/8C, when the fellowship of the dig continues!