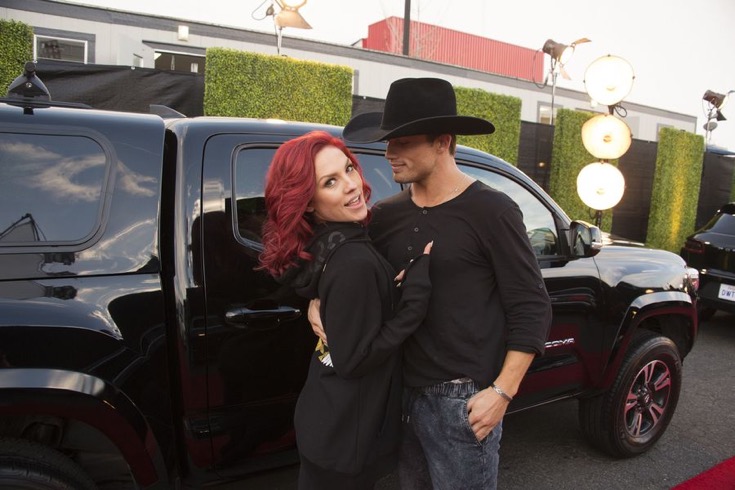 Bonner Bolton might be trying to win the Mirror Ball during this season of Dancing With The Stars , but it looks like he’s also trying to win his partner’s heart, too. There’s new speculation that the professional bull rider might be dating his dancing partner Sharna Burgess.

Of course, the rumors began when Bonner accidentally placed his hand rather suggestively on Sharna during the first episode of the season. They were also spotted showing some heavy PDA during a night out in Los Angeles last week. The two were apparently getting very hot and heavy at the Cowboy Palace Saloon in Los Angeles. Plus, a lot of viewers say that Bonner and Sharna have great chemistry on the dance floor.

If that weren’t enough, Bonner also made it no secret that he really enjoys being with Sharna both on and off the dance floor. He told ET Online, “She’s really good to get along with. We actually have a lot in common. I think our personalities are real similar, but that can make it kind of challenging to sometimes. I think I get on her nerves a little bit sometimes.”

And if they are dating, Sharna doesn’t want to give it away right now. Instead, she told ET Online in the same interview, “Our priorities obviously are getting Bonner through this competition as far as he can possibly go. So in the mean time, we’re having a lot of fun getting to know each other and we do have great chemistry.”

So, are Sharna Burgess and Bonner Bolton dating? No one knows for sure although ‘Dancing With The Stars’ fans know that the truth will come out one way or another. Viewers have seen plenty of contestants and dancers hook up in the past. Sharna and Bonner’s hook up will be nothing new. Some even believe that Sharna and Bonner will wait until the season is over before coming out as a couple. Plus, they are both single and obviously ready to mingle. Bonner and Sharna have confirmed that they are not dating anyone right now.

Tell us, do you think Sharna Burgess and Bonner Bolton are trying to hide their romance from the public? Let us know what you think by dropping us a line with your thoughts and comments below. Also, come back to Our Teen Trends for all the latest news and updates on ‘Dancing With The Stars’ Season 24 spoilers right here!