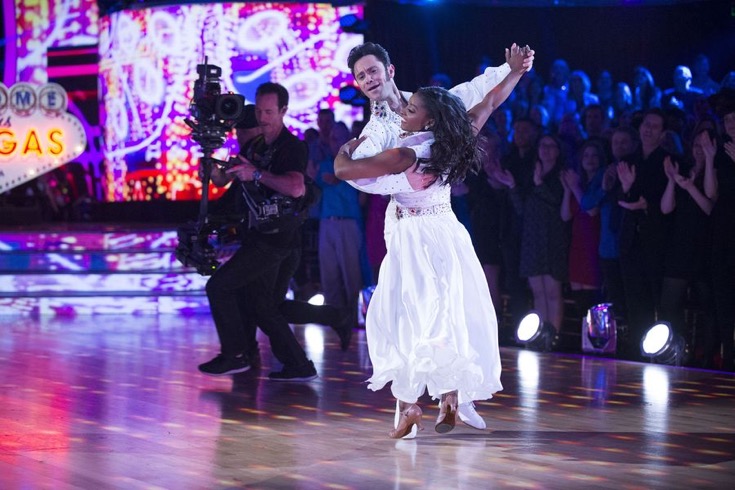 Is Simone Biles feeling pressured to repeat Laurie Hernandez’s success on this season of ‘Dancing With The Stars?’ That’s what a lot of critics believe as the 2016 Olympic gold medalist has been rehearsing twice as long and hard as the other competitors on the show.

According to People Magazine, Laurie herself even offered some insider advice to Simone while at the Hispanicize conference in Miami this week. She won season 23 of ‘Dancing With The Stars’ with her partner Val Chmerkovskiy. Laurie was the first Latina to win in the show’s history.

Laurie told the publication, “I suggest that Simone wear socks under her shoes while practicing so she won’t get blisters on her feet. I learned this myself while competing and am happy to pass on the tip to Simone!”

Of course, Simone is going to have to do more than just wear socks under her shoes to impress the dancing judges. Sure, she’s got the foot work down along with plenty of personality on the dance floor, but critics believe that she still needs to prove that she’s got what it takes to take home dancing gold this season.

Then again, Simone Biles is not the same dancer that Laurie Hernandez was during her stint on ‘Dancing With The Stars.’ In fact, the two athletes even have different gymnastics and competition styles. Yet, many of Simone’s fans aren’t surprised that she’s feeling pressured to repeat Laurie’s success on the show. After all, if Laurie can win the coveted Mirror Ball, then surely Simone can do the same thing.

But can two Olympic gymnasts win ‘Dancing With The Stars’ in back-to-back seasons? A lot of critics will argue that athletes like Laurie and Simone have an unfair advantage over the other contestants because of their athletic backgrounds. If that weren’t enough, fans are also pointing their fingers at follow contestants Heather Morris and Normani Kordei, as they’ve both danced professionally in the past. Even with all the current talent on the show, this season of ‘Dancing With The Stars’ has got to be one of the toughest yet. Do you agree?