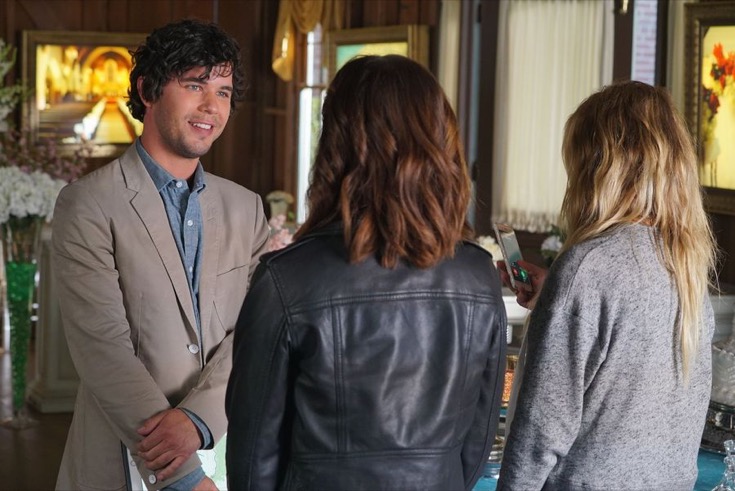 Pretty Little Liars spoilers indicate that Season 2 character Holden is making a big comeback for Season 7. And it looks like he’s got a story to tell, too.

As many fans can recall, Holden Strauss (played by Shane Coffey) first appeared during Season 2 back in 2012. He returned to Rosewood after spending a year living abroad in Portugal with his father. But of course, Holden has some secrets of his own. He pretended to date Aria (Lucy Hale) just so she could get closer to Ezra (Ian Harding). He even covered for her when she sneaked out on dates with Ezra.

Holden and Aria were actually childhood friends. They rekindled their friendship pretty quickly upon his return. It wasn’t until Aria noticed several mysterious bruises on his body and pills in his bag before she pulled the plug on their fake relationship. It turns out that she jumped to her own conclusions a little too quickly because Holden’s bruises were from martial arts and his pills were for his heart condition.

Holden made a brief appearance during Season 3 when Emily (played by Shay Mitchell) bumped into him at party. She quickly noticed an eye tattoo on his wrist, which was actually the same one she remembered in flashbacks during a night she was drugged and brought to Ali’s grave. He said that the tattoo was actually an erasable stamp from a nightclub he often frequents.

And now it looks like Holden is back, and he might have brought along some new problems for Aria with him. She was shocked to see that he is the manager of a venue that she was checking out for her wedding. Holden was also pretty surprised to hear that she’s marrying Ezra too, considering how he once covered up for her several years ago. For fans, they never knew why Holden left or what he’s been up to since his rather odd conversation with Emily. But now that he’s back in Aria’s life again, there’s a good chance that fans will find out soon enough. After all, a lot of the characters on ‘Pretty Little Liars’ go missing for a good reason. Fans will find out the reason behind Holden’s disappearance soon enough.