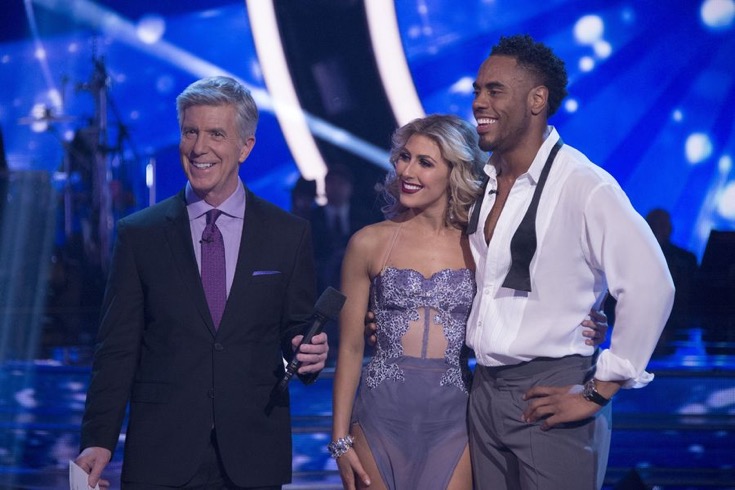 Dancing With The Stars spoilers indicate that Rashad Jennings might be the show’s new frontrunner. That’s because he’s managed to make it this far in the show, with a lot of fans believing that he has a good chance of making it to the top three.

Dancing With The Stars Season 24 has been full of surprises so far. A lot of insiders believed that contestants Heather Morris, Nancy Kerrigan and Simone Biles would all make it to the top three. But it looks like that might not happen. Former ‘Glee’ star and professional dancer Heather Morris got the boot two weeks ago. Many viewers were surprised to see Nancy Kerrigan leave as well.

For the Monday, May 8 episode, both Simone Biles and Rashad Jennings offer the strongest competition. Sure, Normani Kordei is also a favorite, but a lot of viewers believe that she might not have enough fans in the audience to make it to the last round. That’s why it might be a fight to the finish for Simone and Rashad. With that being said, David Ross or Bonnor Bolton might be dancing their last dance on Monday night’s show. During the second round, the couples will perform a trio dance, with the third performer chosen by the judges.

Related: Alan Bersten To Get Promoted To Full-Time Dancer On Dancing With The Stars?

The next episode will consist of two rounds. During round one, the professional dancers will choose the song and the dance to their celebrity partner. For the first round, Simone Biles and Sasha Farber are performing a foxtrot to “What Makes You Beautiful” by One Direction. Bonnor Bolton and Sharna Burgess will dance an Argentine tango to “Believer” by Imagine Dragons. Meanwhile, Rashad Jennings and Emma Slater while jive to “Shake a Tail Feather” by the Blues Brothers and Normani Kordei and Val Chmerkovskiy will dance to a contemporary dance to “Freedom” by Anthony Hamilton and Elayna Boynton. David Ross and Lindsay Arnold will waltz to “Humble and Kind” by Tim McGraw.

Dancing With The Stars Season 24 airs every Monday at 8pm EST on the ABC network. The winner of the Mirror Ball is expected to be named during the May 23 episode. Of course, no one knows who is going to be the winner at this point. In other words, anything can still happen. In the meantime, don’t forget to check back with Our Teen Trends for all the latest news and updates along with spoilers for ‘Dancing With The Stars’ Season 24 right here!