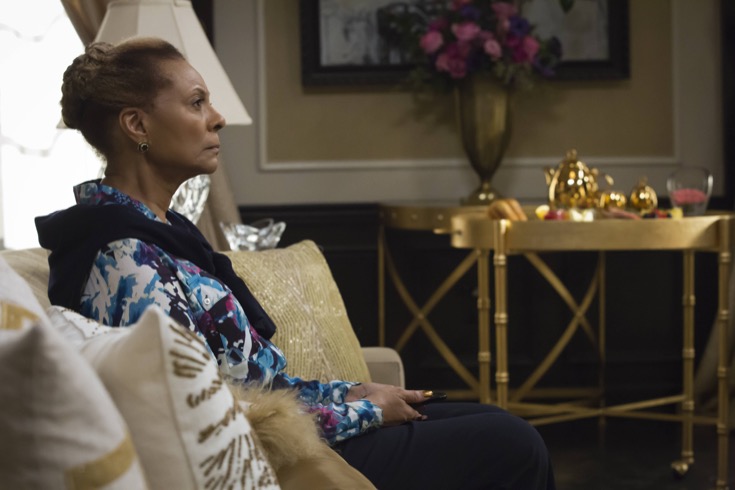 Empire Season spoilers indicate that the Season 3 finale is going to be quite the family affair: especially between Lucious and his mother, Leah.

With everything that Lucious is dealing with right now, he’s got a big mess on his hands, and it involves his mother Leah. During the May 17 episode, Leah stabbed Lucious’ half brother Tariq in the neck just as he was about to tell Lucious that it was Leah who kidnapped his granddaughter Bella.

So what’s next between Lucious and Leah? For anyone who has been following the Lyon family over the last several years, they know that there will be plenty of fireworks between this mother and son duo.

In fact, show runner Ilene Chaiken recently told the Hollywood Reporters, “Leah is not straight-forward, so suffice to say that this isn’t simply Leah killing Tariq. This is part of a larger plan on Leah’s part. She’s had mixed feelings about Tariq all along. He’s the bastard child so she dislikes him, but she tolerated him for a moment. But we certainly have teased the idea that Leah has a homicidal nature to begin with. She’s wanted to kill various members of the Lyon family, but one in particular. And there will be a connection.”

In other words, Tariq’s death will definitely have a profound affect on Lucious and Leah’s relationship. He has a lot going on as it is and now he has to deal with his mother being a murderer. Plus, there’s also a lot of talk about a ‘total reset’ on the show. Even though producers don’t want to give away too much, it is believed that each member of the Lyon family will either deal with a new drive or challenge.

What’s more, Demi Moore’s character is expected to make an appearance during the Season 3 finale. She is expected to play a nurse with a mysterious past who will find herself in the middle of the Lyon family’s messy and complicated drama. Viewers will also be seeing a lot of Demi’s character in new episodes of Empire Season 4.

What’s more, Empire producers are also hoping that the finale will also bring in viewers that the hit show desperately needs. Empire Season 3 ratings have fallen flat, with many tuning out or simply changing the channel.

Empire Season 3 airs Wednesdays on the Fox network. Don’t forget to check back with our Teen Trends for all the latest news and updates on Empire right here!