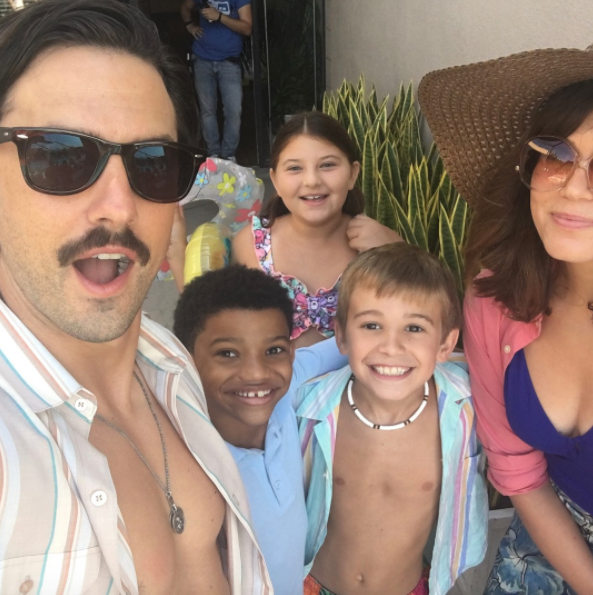 Actress Mandy Moore has just shared new behind-the-scenes photos of her This is Us co-stars on her social media accounts along with a special message for fans. The Hollywood star, who plays family matriarch Rebecca Pearson in the hit NBC series, has made it no secret that she can’t wait to start shooting Season 2 real soon.

Mandy shared a flashback scene of her along with her on-screen husband Jack Pearson (Milo Ventimiglia) and their three young children, played by Lonnie Chavis, Parker Bates and Mackenzie Hancsicsak. She captioned the photo with, “I’m really missing my @nbcthisisus fam right about now. I’m super bummed to miss the #mtvmovieandtvawards and am truly honored to have been nominated. Unfortunately I have to be at work at 530am in Atlanta tomorrow morning. Have fun and see you soon.”

What’s more, she also shared never before seen photos with her and Milo as Rebecca and Jack and one with actress Chrissy Metz, who plays her adult daughter Kate Pearson. So does this mean that the cast and crew are getting ready to start shooting for Season 2 real soon? That’s what a lot of fans are hoping. They are also going to be checking the casts’ social media accounts for any hidden clues for Season 2.

Related: Justin Hartley Admits To Feeling Overwhelmed With This is Us Role

While there’s no doubt that This is Us has a strong fan base, a lot of viewers criticized the show for the endless show teasers about Jack Pearson’s death. For the longest time, many viewers believed that fans would be getting the answers they desperately wanted about Jack’s death before the Season 1 finale. But that didn’t happen. Instead, the episode ended with a big blowout fight between Rebecca and Jack, which many believe is just the beginning of the end to their marriage.

Either way, the show’s producers are hoping to keep the momentum strong well into the second season. Fans will just have to find out what happens next by tuning in to ‘This is Us’ when it returns to the peacock network later after the summer break.

Of course, anything can happen. But if the writers choose to keep fans quiet about Jack’s death (or not show it at all), there’s a good possibility that fans might simply lose interest and change the channel. In the meantime, don’t forget to check back with Our Teen Trends for all the latest news, updates and spoilers on This is Us Season 2 right here.