Once again, Prince Harry has gone on a wild rampage of predicting doom. Those who have been keeping up with Prince Harry’s crazy declarations have heard him suggest ala Greta Thunberg that the world will end for the human race in just 12 years if climate change isn’t addressed. Now, Prince Harry is at it again. Only this time, the Duke of Sussex is castigating social media platforms such as Facebook because it has, “contributed to, stoked, and created the conditions for a crisis of hate, a crisis of health, and a crisis of truth.”

In other words, Prince Harry has chosen to go far left in a woke battle against media giants that others feel are outrageously censoring and curtailing American’s right to free speech. Indeed, Harry’s placing himself firmly on the side of those who believe corporations and governments much exert more control over the masses. Of course, that’s not strange considering the fact that Prince Harry is, after all, a prince … an example of an old-world, draconian, top-down, centralized system of government where power lies in the hands of the few rather than the many. 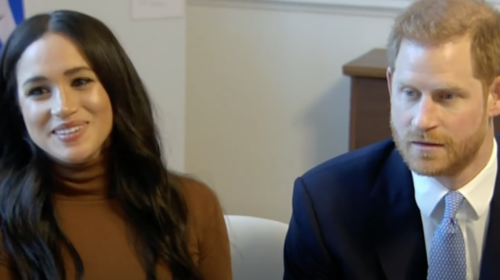 In an op-ed that Prince Harry penned for the website, Fast Company, he suggested that he fears for his son’s future. Specifically, Prince Harry wrote, “From conversations with experts in this space, we believe we have to remodel the architecture of our online community in a way defined more by compassion than hate; by truth instead of misinformation; by equity and inclusiveness instead of injustice and fearmongering; by free, rather than weaponized, speech.”

The Royal Family, The Royal family News, The Royal Family Gossip, Queen Elizabeth, Prince Harry, Prince William, Kate Middleton, Meghan Markle, Megexit, Camilla Parker Bowles, Prince CharlesPrince Harry went on to write that, “This remodeling must include industry leaders from all areas drawing a line in the sand against unacceptable online practices as well as being active participants in the process of establishing new standards for our online world.

Companies that purchase online ads must also recognize that our digital world has an impact on the physical world—on our collective health, on our democracies, on the ways we think and interact with each other, on how we process and trust information.

“Because, if we are susceptible to the coercive forces in digital spaces, then we have to ask ourselves — what does this mean for our children?

“As a father, this is especially concerning to me.”

Can PRince Harry Have His Old Bed Back If He Leaves LA?https://t.co/Ej305VuCyw

Harry Thinks You Must Be Protected

Of course, that’s all ironic coming from someone like Prince Harry who doesn’t possess a university degree himself. However, like all those who have a totalitarian worldview, Prince Harry urges the masses to give themselves over into the hands of the elite.

In any case, it’s worth noting that some believe that Prince Harry’s penchant for hysteria, his singing a tune of privilege, of oppression, and of totalitarianism is merely a symptom of a man who doesn’t understand that he moved to America … a place where elitism isn’t historically looked upon with kindness.