The Bold and The Beautiful spoilers and comings & goings tease it would be interesting to see Ivy Forrester (Ashleigh Brewer) return. Now that the whole Fake Hope Doll story is at an end and Liam Spencer (Scott Clifton) was unfaithful to his wife, Hope Spencer (Annika Logan), Ivy’s coming back to town would definitely stir things up.

If Bold and The Beautiful brought back Ivy, she could work at Forrester with Steffy and Thomas to take down the Logans. Now wouldn’t that be a treat for Forrester Fans?

Hope has already had a lot to deal with, trying to maintain a relationship with Thomas Forrester (Matthew Atkinson) despite all his craziness because she has custody of Douglas, then having to deal with the Fake Hope Doll, that in itself was extremely stressful, and  Thomas was in the hospital fighting for his life! 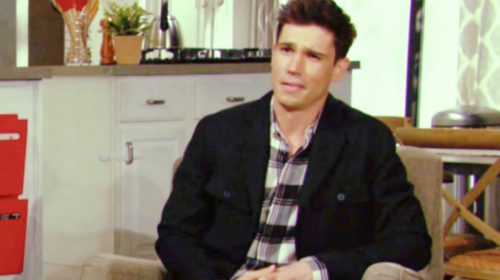 The Bold And The Beautiful Spoilers: Furious Finn Lays Down The Law With Liam

When Hope Logan finds out about Liam sleeping with Steffy Forrester (Jacqueline MacInnes) and whether or not they are having another baby, there may be a slim chance that she might forgive him and try to save their marriage.

But, if Ivy shows up, Bold and Beautiful rumors tease having two of Liam’s exes around is going to be a tough pill to swallow.

Fans really took to Ashleigh Brewer when she portrayed Ivy on B&B and longed to have her back on the show. Since leaving, she was cast in My Dinner with Herve and she also joined Home and Away as Chelsea Campbell. She then returned to Los Angeles and will next appear in the tv comedy-drama, Lovestruck.

The Bold And The Beautiful Spoilers – Will Hope Spencer Fall In Love With Thomas Forrester?

We have really enjoyed the “new” Thomas and are hoping that a kinder, remorseful version of Thomas will appeal to Hope. Afterall, he is the father of the child she is raising, and a better version of him may just give her that happily ever after that Liam apparently can’t, since he has trouble staying out of Steffy’s bed for too long.

There is no denying the chemistry between Thomas and Hope when they are in The Bold and the Beautiful scenes together and it would be so interesting to see how their relationship blossoms once Thomas’ medical issues are behind him.

What do you think, would you want Ivy to return to The Bold And The Beautiful? Or do you have some other character in mind to return to the B&B set in 2021?

Be sure to catch up on everything happening with B&B right now. Come back here often for The Bold and the Beautiful spoilers, news, and  B&B updates.