Married at First Sight spoilers and updates tease that the show features couples, paired up by relationship experts, who agree to marry when they first meet. The couples go on a honeymoon and when they return home, they live together for the rest of the eight weeks.

If you’ve watched season 12 then you have been exposed to Chris Williams, the 27-year-old owner of a now shut down, Subway store, and you know that his actions represent those of a spoiled child more than a grown man on this season’s MAFS. 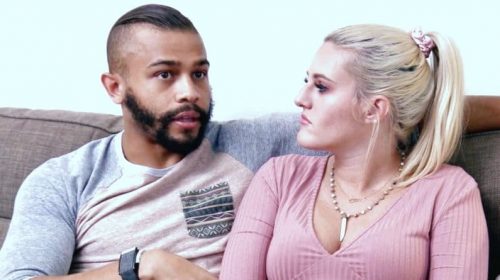 A little backstory – Chris admitted to having sex with his wife Paige Banks three times and then told her he wasn’t attracted to her. Then he dropped the bomb that his ex-fiancé was six weeks pregnant, then he bought his ex a Benz because he wanted his future king or queen to drive around in style. At that point he told Paige that he wanted to get back with her, he had feelings for her, then he told Pastor Cal that Paige’s face was ugly and then pulled away from Paige a second time and blamed her for his wanting a divorce.

After Chris said he wanted a divorce, for the second time, fans were thrilled that there was no Chris footage of him on MAFS for two weeks in a row. And just when we all get happy and started enjoying the show again, we see spoiler videos of Chris and Paige both returning on Decision Day. And when Chris is asked if he wants to stay married or get a divorce, he says he is not ready to answer the question. The question was simple, either yes or no, and Chris, being Chris, won’t give the experts a clear answer. The experts keep telling Chris, “no, this is the time,” and as usual Chris keeps arguing and won’t answer. Never before has any MAFS cast member done this and certainly no surprise to anyone, that Chris would be the first.

Married At First Sight Spoilers: Chris Williams’ 15 MINUTES OF FAME Are Not Over Yet?https://t.co/LxG1ZInUlH

Married At First Sight Spoilers – Dr. Viviana Has Had Enough!

Fans and experts alike are fed up with Chris, here is what one fan said on Reddit, “(Chris) he despises being challenged, normally he tells whomever to fo and then leaves. When he can’t he uses body language to let you know he is insulted and fo. He did the same thing to Pastor Dwight, Pastor Cal, and Dr. Pepper. He is incapable of recognizing how stupid he looks and is. He has earned the title All-Time Worst Human to ever be on MAFS in any capacity.” Yikes, and there are many like this.

What are your thoughts about Chris? Do think it is right that he steals screen time from other MAFS cast memebers and won’t follow the rules?