The Young and the Restless (Y&R) Spoilers: Eric Meets With Sally – Finds Solution To Summer Dilemma The Young and the Restless (Y&R) spoilers say that Sally Spectra (Courtney Hope) will soon see a familiar face. That’s because Sally will fly back to L.A. to meet with Eric Forrester (John McCook) in the hopes of finding a solution to a new dilemma that she has. In fact, Sally is going to launch a new scheme to help advance her career but is going to need the help of her old boss, first. Read on for all of the latest spoilers.

Sally is at a crossroads as she doesn’t know if she should pursue her relationship with Jack Abbott (Peter Bergman) or take a new job offer in Los Angeles. As many fans know, Sally has been through a lot and has endured so much heartache that she doesn’t know if she should take things to the next level with Jack. Plus, Sally didn’t leave Los Angeles on the best terms, either. She didn’t go this far in her career to take a step backwards when all she wants to do is go forward.

But if there’s anything that we’ve learned about Sally, it’s that she’s definitely a schemer. According to the latest edition of Soap Opera Digest, Sally is on a mission to convince Eric to help her supposed friend, Summer Newman (Hunter King), land a new gig in Milan. 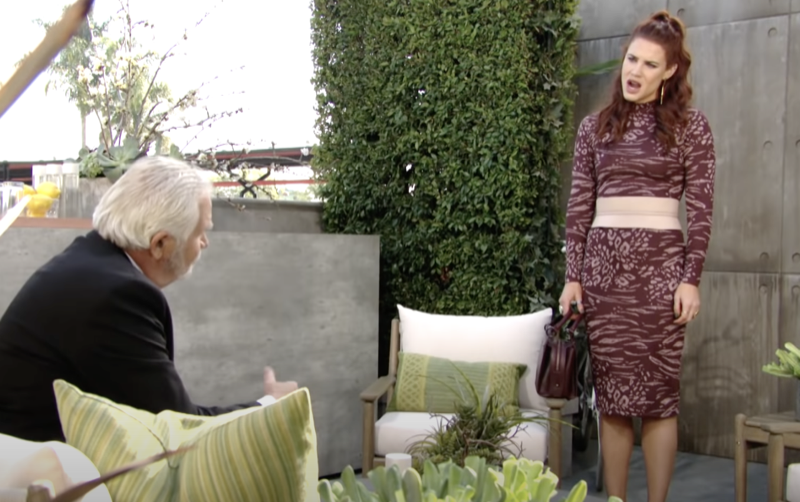 Speaking to the publication in a new interview, Courtney Hope, who plays Sally on the hit CBS soap, puts it this way, “She tells him that there’s this job in Italy that Summer really wants, but it would look bad if she went after it because she just became president of JCV. If Marchetti came after her, that would be a totally different story.”

Seeing how Eric is an investor, he can put in a good word for Summer, which in turn would benefit Sally and potentially give her a bigger position at JCV, which is all she’s ever wanted since she was CEO of Spectra Fashions. Of course, fans will have to tune in to find out what will happen next!