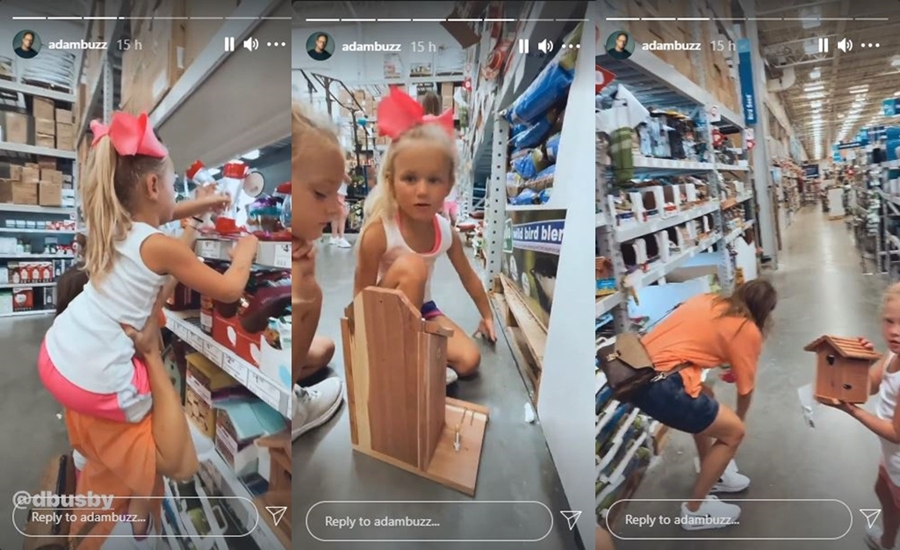 OutDaughtered fans know that Adam and Danielle Busby live in a really nice house in League City, Houston, Texas. There’s a playground, a pool patio, and plenty of lawn. Plus, Adam quite often works on the flower beds. Now they went shopping and bought some flowers and it looks like the quints also wanted their mom to buy squirrel feeders.

TLC fans know that this summer, the Busby family packs in a lot of fun things for the kids to do. Danielle went away for a small vacation to Michigan with a friend before the summer. Actually, after her heath concerns and the often stressful behavior of the quints in the last season, fans felt happy that Adam stayed back with the kids. Certainly, she deserved a well-earned rest, However with that out of the way way, she’s able to cater more to the kids during the summer break.

Right now, the OutDaughtered quints attended summer camp. It’s the second time that they went off to cheer camp. The only quint who opted out is Hazel who isn’t comfortable with the balance and coronation needed for cheer. In fact, Adam made it all up to her and took her out for Daddy Camp where they visited Largo Mar Lagoon and the Texas Entertainment Xperience. Now it looks like they plan on spending some time enjoying their yard as the quints asked their mom for squirrel feeders.

On June 29, Adam Busby took four of quints, Ava, Oliva, Riley, and Parker to cheer camp. Later, in his Instagram stories, he talked about it when the family visited a shop. There, he revealed his cart had some flowers in it. Plus, some of the kids seemed interested in getting a birdfeeder. However, most of them seemed more interested in squirrel feeders. Adam told the quints that when he took them to cheer camp, he saw some squirrels.

If you wonder where Hazel was during the outing, she’s in Lake Charles with Blayke, staying with their nana for a bit. The OutDaughtered kids take turns spending time with their cousins in the area. The family went to Lake Charles and while they were away work continued on their pool. Adam decided it needed resurfacing. Plus, they made a cool deck. Hopefully, by now, it’s ready for the quints to enjoy again. Meanwhile, the squirrel feeders look like a new addition to the yard. So, the quints seemed excited.

Riley Understands How The Feeders Work

Riley, the brightest of the OutDaughtered quints explained to her dad how the feeder she wanted worked. She said they might put some corn on the spike on the side. Do squirrels eat corn? Well, according to Squirrel Enthusiast, they love soft corn. Actually, they pretty much compete with birds as well, and squirrels often raid bird feeders.

If you don’t live where the TLC quints stay, you might not know that Houston has squirrels. KHOU11.com reported that Houston has “Flying squirrels, the Eastern gray squirrel, and [the] Eastern fox squirrel.” Hopefully, Adam gives more feedback when the squirrels start visiting their yard.

Remember to check back with us often so you don’t miss any news, spoilers, and updates about the Busby quints from TLC’s OutDaughtered.