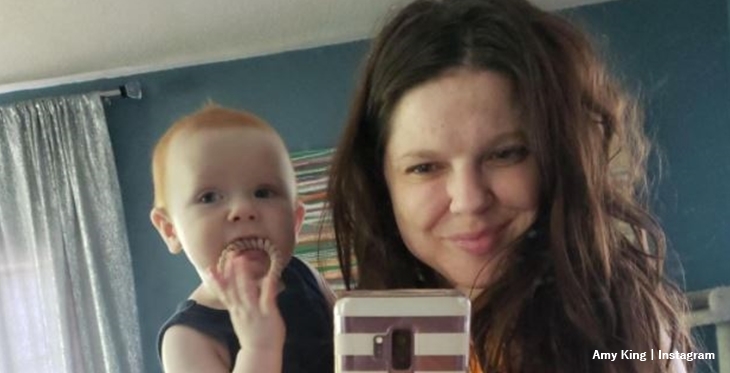 Duggar fans who suspected that Josh molested Amy Duggar King will be happy to know that she was not involved in that. When the news came out, it only mentioned some of his little sisters and another girl. The news emerged this week when she claimed that Jim Bob and his family lied to them about Josh.

Amy King Cut Off Toxic Family After Josh Was Arrested

Josh never appeared on Counting On, and he lay behind the reason that 90 Kids and Counting was canceled in the first place. Following his arrest this year for alleged child pornography offenses, Amy told her fans that she cut off all toxic relationships. Presumably, she talked about Jim Bob and Michelle Duggar. At least she still remains close to her cousin, Jill Dillard.

After the arrest of Josh, Amy King made a few cryptic posts but later told fans that’s she is still under a TLC contract. So, hope that between them, Amy and Derick Dillard might spill some tea faded. Nevertheless, it becomes clear now, that fans ask her about the original scandal. Possibly, they bombard her with questions in her DMs. Rather defensive, she spoke out on Twitter about it.

Amy King Feels That The Duggar family Lied About Josh

On November 24, Amy took to her Twitter and posted up about Josh Duggar, Even then, she didn’t use his actual name. She said, “I did nothing about it…BECAUSE I DIDN’T KNOW.” Then she explained why she feels the Duggar family lied to her. She added, “When we asked where a certain individual was years ago – we were told that he was at a camp helping an organization build homes.” 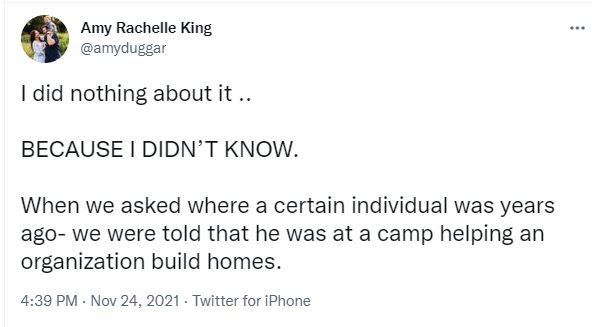 Amy King clearly talked about Josh As fans know that Jim Bob sent him away to a church organization. In fact, a lot of them slam the family now as they think if Josh had been dealt with through the proper channels, he might have never re-offended: presuming he’s found guilty, of course. Still, it sounds like at least, Amy escaped being one of his victims, unlike her cousin Jill.

Fans who read the tweet by Amy King reach out to her. One of them wrote, “You were a child and should feel no responsibility for this. I can understand that you wish things turned out differently. Maybe he could have gotten real help earlier. But, that’s not your fault at all! Lots of manipulation, gaslighting, etc took place. It’s very sad.”

Meanwhile, others felt the least Jim Bob Duggar could have done was warn the extended family. That way they could have taken care to make sure Josh was never alone with Amy.

Be sure to catch up on everything happening with The Counting On family right now. Come back here often for more news and updates from Amy King.