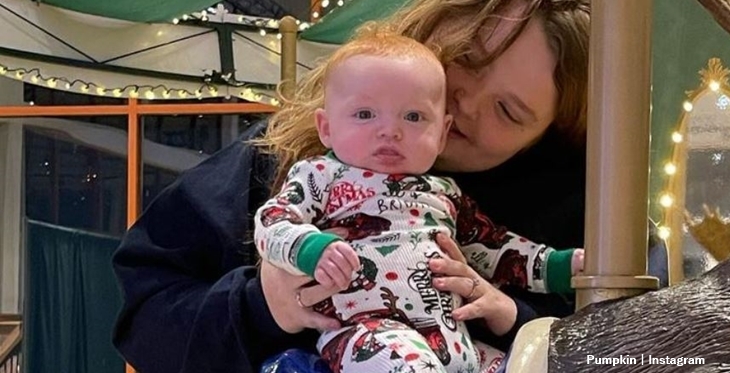 Mama June Road to Redemption ended without Honey Boo Boo, (Alana) and Pumpkin, (Lauryn) really fully healing the rift between them and June Shannon. Since then, Pumpkin had her baby, Bentley, and apparently, June has met her grandchild. Meanwhile, Honey Boo Boo remained living with Josh and Pumpkin Efird. At Thanksgiving, Pumpkin posted up photos of her family sans Honey Boo Boo. So, where could she be?

Thanksgiving is a time for family and friends, so when Pumpkin shared about it, WEtv fans expected to see Honey Boo Boo. However, she didn’t appear at all. The last time that Pumpkin shared a photo of her was early this month, In those photos, she said that she loved that her daughter Tinks, (Ella Grace) and her sister were there through her darkest days. At one stage,  she and Josh had problems, but since cute Bentley arrived they seem in a good place.

Mama June star Honey Boo Boo went fairly quiet on her Instagram after she posted about her new boyfriend, Dralin Carswell. Although her aunt Doe-Doe approved of him, fans lashed at her as he seemed a lot older than her. In fact, she later deleted the photos. Still, fans hope that she found a nice boy to enjoy some of her teen years with.

In her post on Thursday, November 25,  Pumpkin showed one photo of herself with Bentley, Josh, and Ella Grace. Another photo revealed her with her daughter and her husband, and the final one showed Pumpkin and Josh together. She captioned her post with, “Happy Thanksgiving from the Efird’s ❤️🦃🍽😘.”

As you can see above, the Mama June star didn’t mention Honey Boo Boo, and she’s not in any of the photos. Still, WEtv fans commented and wished them a wonderful Thanksgiving. One of them said, “Happy Thanksgiving to you and your whole family. Love the shirts❤️.” Then another fan commented, “Those shirts are GREAT!! Such sweet family pics, hope y’all had a great day!!”

No Posts About Honey Boo Boo

Mama June Shannon did not share about Thanksgiving yet this year. Certainly, she made no mention of her youngest daughter. Neither did her Aunt Doe Doe. So, WEtv fans can only assume that Alana is around but hanging with her boyfriend. Perhaps she gets tired of being on social media. After all, every single time she appears in photos, ugly trolls hammer at her and body-shame her. Hopefully, she is still getting along with her sister Pumpkin just fine.

Be sure to catch up on everything happening with the WETV cast right now. Come back here often for more Mama June spoilers, news, and updates.