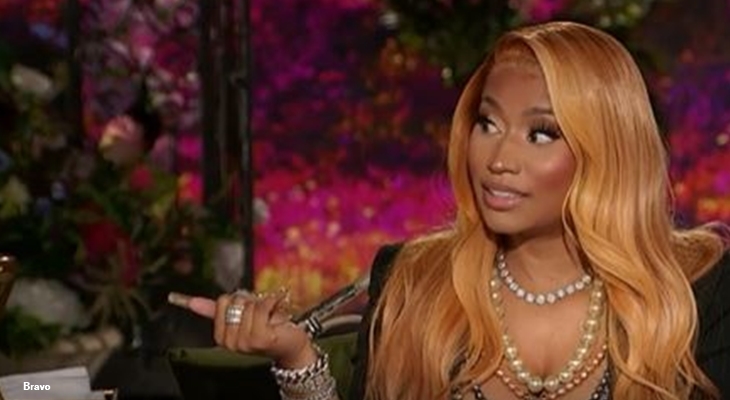 The Real Housewives of Potomac Reunion Part 4 aired on Sunday, November 28. Nicki Minaj appeared on the set and hosted part of the event. Well, Bravo fans saw that she shaded Candiace about her Drive Back single. Fans saw the release earlier this season. To prove her point, she made Candiace perform a live, impromptu singing session.

Nicki Minaj takes criticism of her own music very seriously. In fact back in 2012, after a DJ called her song “Starships” “f***ing bullsh**t,” she vowed to never perform for the NYC radio station Hot 97. Lil Wayne, the owner of her record label, told her to back out of the Summar Jam concert and she agreed, Well, it seems she can’t take criticism but she’s happy enough to dish it out. Fans saw that she shaded Candiace Dillard Bassett.

The Real Housewives of Potomac is just one of many in the Bravo franchise, which continually expands. However, it’s not every day that the other stars stick up for one of their own. Actually, some of them seemed a bit upset that Nicki condemned Candiace so quickly without checking out all the facts first. In fact, Karen said,“Candiace can sing. It’s a nine for effort, it was a nine for talent.”

The Real Housewives of Potomac – Nicki Quick To Shade Candiace

@bravhosusewives on Instagram shared the clip. In the caption, they asked, “Nicki Minaj shades Candiace’s music! 🌸 Do you like Candiace’s song?” Well on the clip, fans saw that Nicki clearly didn’t research the subject before she shaded the budding musician. Questioning how popular it is, Candice defended herself, saying, “[Drive Back] hit number 24 on the R&B Billboard chart and number four on the iTunes chart.”

Actually, The Real Housewives of Potomac fans thought that it was a bit harsh for Nicki to try and prove that Candiace couldn’t really sing. First, she seemed disbelieving, saying “20,000 albums? You sold 20,000 albums?” Then, she told her to do a live performance then and there, with no backing. However, a poke in the eye came when she not only managed it but sang really well.

Bravo Fans React In The Comments

The Real Housewives of Potomac fans replied to the question about Candiace and her talent. In the comments section, one fan tantalized the others by saying, “Her album is fantastic… i worked in the music industry in the talent dept and like her or not she has talent and a few really good songs— if i told y’all the truth about Nikki’s start she might wanna hush 🤐.” Aww, the fan didn’t spill the tea though.

Then another fan commented, “Low blow! Not everyone that sings will be a superstar but Nicki could be supportive! There’s room for everyone.”

This comment also arrived: “IHATE Candiace but she can sing and Drive Back is a bop. And you would think that Nicki would give her props for chasing her dream and making an album and a couple videos.

Be sure to catch up on everything happening with the Bravo franchise right now. Come back here often for more The Real Housewives of Potomac spoilers, news, and updates.