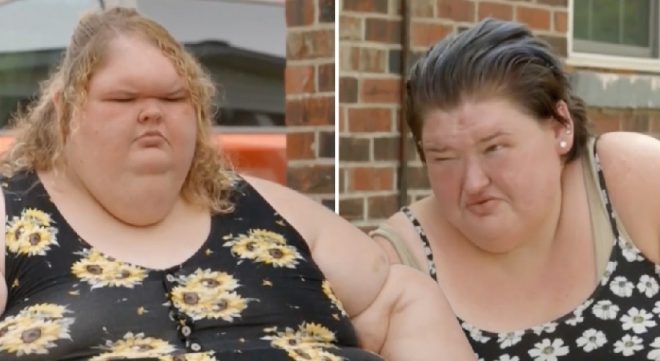 1000-Lb Sisters spoilers point to a focus on the stars’ weight loss. And for both Amy Slaton Halterman and Tammy Slaton, that means understanding why the siblings struggle to follow their doctor-decreed diets!

Filming reportedly has begun for the reality TV show’s third season. So with the cameras rolling and fans eager for the premiere, let’s look at what Amy and Tammy have and may share about their weight loss diet wars.

One question frequently raised about 1000-Lb Sisters concerns whether Tammy Slaton and Amy Slaton Halterman really understand obesity’s danger. Some fans feel that Amy has listened to the sisters’ doctors and used their warnings to motivate herself.

For instance, the first two seasons of 1000-Lb Sisters showed Amy progressing slowly but steadily toward her weight loss goal. Eventually, the reality TV star even lost enough to qualify for bariatric surgery.

But in contrast, Tammy went up and down the scale. Seeming to ignore or misunderstand Dr. Proctor’s recommendations, the reality TV star eventually gained more than she lost! As a result, the sisters clashed on who should take responsibility for Tammy’s failures.

As producers prep for season 3 of 1000-Lb Sisters, fans hope that Amy can somehow help Tammy shed those pounds. Why put the responsibility on Amy? Because this new mom battled the same dietary changes in her own weight loss struggles.

For instance, both Amy and Tammy confessed to In Touch that giving up their beloved sugary sodas seemed almost impossible. But Amy succeeded. The 1000-Lb Sisters star admitted that the soda sacrifice rather than the food represented the biggest challenge.

“The food part is okay,” said Amy. But staying away from those sugary sodas felt “really hard. But I ended up doing it and I haven’t had a soda in what, four months now? I haven’t even thought about sodas really. Well, every now and again, I’ll crave one. But mostly, I’ll just drink water and coffee.”

As Tammy’s social media followers know, Tammy seems to struggle much more than Amy with her diet. And this season could prove the turning point for the 1000-Lb Sister star. With her new doctor warning her about her health, can Tammy give up the drink and food she loves?

In her interview with Amy, Tammy admitted that the soda represented a challenge. But her beloved “fried foods” felt like the biggest obstacle.   “For me, it was giving up the soda too, and the fried foods. I mean, I’m still having trouble giving up soda and fried foods,” admitted Tammy.

Will 1000-Lb Sisters season 3 reveal that Tammy finally loses as much or even more weight as Amy?! Check out the sneak peek below. And then check back on our site for all the 1000-Lb Sisters news and updates.