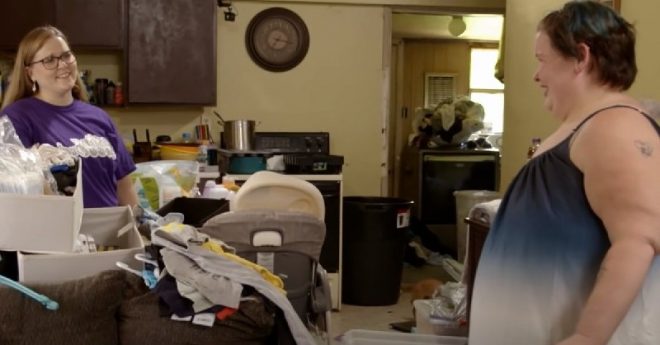 1000-Lb Sisters spoilers reveal that fans are not happy with Tammy and Amy Sl-jm=]aton’s personal hygiene on the show. They really do think it needs some work. Both of them have been working on losing weight and have tried working on themselves as well. It seems that with all of this focus on losing weight, fans think that their personal hygiene has somehow escaped them.

One of the first things that fans noticed about the Slaton women was the uncleanliness of their homes. Amy’s home is cluttered and has roaches and mice everywhere. She also has a small child so this doesn’t seem like the best environment for him to be in. This is not the only thing that viewers have noticed though.

There are times that Tammy won’t even brush her teeth and Amy has been hoarding in her home and it looks like she may have to get professionals in there to help her clean up. The living conditions for these women are just terrible and viewers really think that they could use a boost when it comes to their cleanliness.

Viewers have been concerned about the hygiene of the sisters because of their poor health. Many fans of the show were shocked when Tammy Slaton went to the dentist on the second season and what they found was pretty terrible. She is missing teeth and she has never tried to get them replaced. She lost teeth when she was a child, but it looks like they had been taken care of before she hit adulthood.

Tammy has been very open about how she doesn’t brush her teeth and fans were really shocked by this. Tammy’s teeth aren’t the only thing in question though. Fans are also concerned about how dirty Amy’s feet are. This makes viewers think that she doesn’t bathe regularly and this makes us worry about how she will take care of her child. Let’s hope these two can get their hygiene in order.