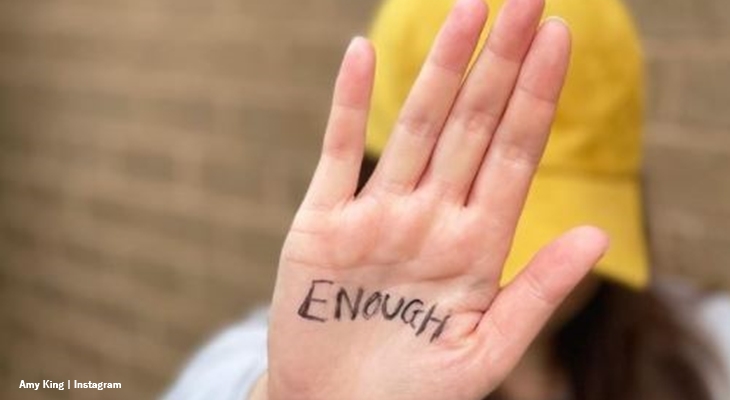 The Josh Duggar trial started and now it seems that Amy Duggar King feels safe enough to post openly about the case. Since the arrest of her cousin for allegedly possessing and downloading child pornography, she mostly made cryptic tweets and Instagram comments. That’s probably because she was under some sort of gag order by TLC. Bear in mind, she appeared in 19 Kids and Counting, though, like Josh she wasn’t really part of Counting On.

Soap Opera Spy reported that Jill Dillard might be clear to testify in court. At the time, it wasn’t clear that she would necessarily testify for the prosecution. Well, talking about the possibility of her testifying at the Josh Duggar trial, Amy Duggar King referred to it on her Instagram Stories. She also talked about the possible testimony of Jim and Bobye Holt. She didn’t write an essay, but Amy said enough to know she hopes that Jill speaks on behalf of the prosecution.

Taking to her Stories, Amy shared a card. It read, “Speak the truth even if your voice shakes.” Then, she tagged Jill Dillard and the Holt family. If you don’t know, Jim and Bobye Holt are also listed as witnesses. Meanwhile, Jim Bob, who testified at the evidentiary hearing claimed he couldn’t recall a lot of things. So, the judge ruled him out as a witness, much to the delight of TLC fans. 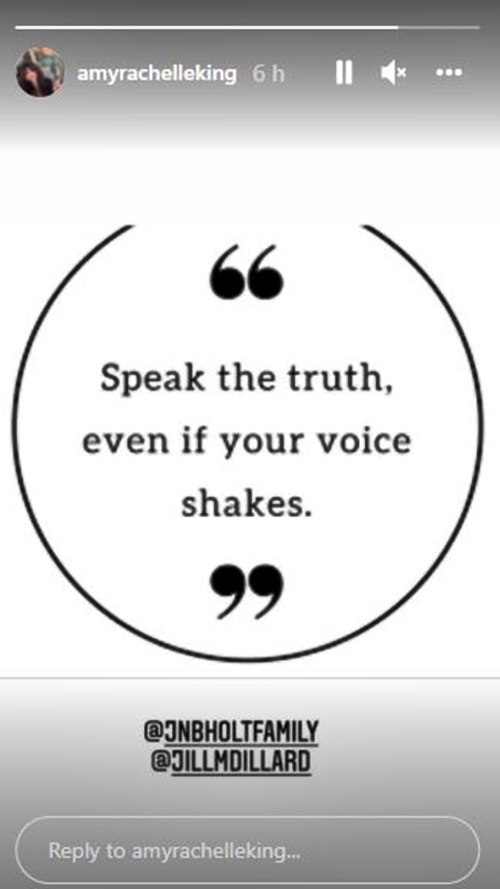 The Josh Duggar trial generated a lot of interest in who the fifth victim might have been. Recall, in 2015, when the news broke about the molestation scandal, four sisters and one Jane Doe were mentioned. Right now, the court isn’t really talking much about the fifth victim. However, fans seem determined to find out who they are.  Well, it for sure was not Bobye Holt, if that’s what you are thinking.

Will Jill Testify Testify Against Her Brother?

The Josh Duggar trial raised some interesting theories about Jill’s husband Derick Dillard. One Redditor floated the theory that Derick went to study law to prepare Jill for such an eventuality. Clearly, Amy Duggar King hopes that her cousin is steadfast and tells her truth to the court.

Be sure to catch up on everything happening with the alums from 19 Kids and Counting and Counting On right now. Come back here often for more news and updates about Amy Duggar King and the Josh Duggar trial.