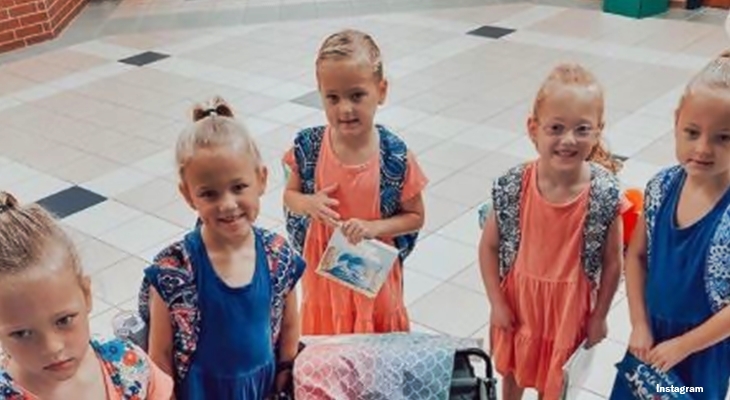 OutDaughtered fans know that the Busby family really enjoys the holidays. It doesn’t matter which one, they jump in with all their feet and make the most of it. This year, once again, they enjoyed the League City Christmas Parade. Actually, one special year, they were the celebrities at the parade. But this year, it looks like they just went along to enjoy all the festivities.

OutDaughtered Family get Into Holiday Spirit With Gusto

This Halloween, the family once again enjoyed the festivities very much. Actually, a lot of fans thought they killed it with their costumes. However, others thought it was all a bit inappropriate. After all, they dressed up as characters representing the Day of The day, a special Mexican cultural theme. Anyway, although a lot of people slammed them, they didn’t seem to mind. As usual, Halloween came with all the usual decorating and scary masks that Adam Busby loves so much,

Any holiday that comes along gets the OutDaughtered family excited. Actually, Christmas is one of Danielle’s favorite times of the year. This year, they all went along to the Christmas parade held in League City, Texas. The night before, they all enjoyed a party after a special fashion show for their Graeson Bee clothing line. It looks like the spirit of the season is upon all of them. So, they wouldn’t miss the night parade in League City

OutDaughtered Family Were The Main Stars Of The 2019 Parade

Two years ago, the League City Parade was a bit different. In fact, the Busby family featured the back of a truck, as the celebrities of the night.  TV Shows Ace reported that the “celebrity marshals included the Busby family.” They added, “Not only did Danielle share about it, but the League City Facebook page covered the video of the event.”  Of course, that was before the worst of the pandemic arrived, so folks packed the streets.  This year, it looks like they joined the rest of the spectators.

The OutDaughtered family might have taken part in the parade of floats. One fan wrote on Danielle’s post,“The float turned out so good!! ❤️💚.”  Then another fan wrote “Texas knows how to celebrate Christmas! We are in San Antonio this weekend and I’m so amazed at the decorations and [everyone] coming out to celebrate 🎄❤️.” Meanwhile, on Adam Busby’s page, he revealed his new truck which was all decked out for Christmas. Adam said that he drove the family to the parade in it.

Will Fans See More Of The Busby Family Enjoying Holidays On TV?

OutDaughtered fans who hope for a new season seem happy that Adam hinted strongly about a new season. He posted up a photo of Hazel and said that she inspected the new intro for the show. Hopefully, TLCs soon announces a premiere date for it.