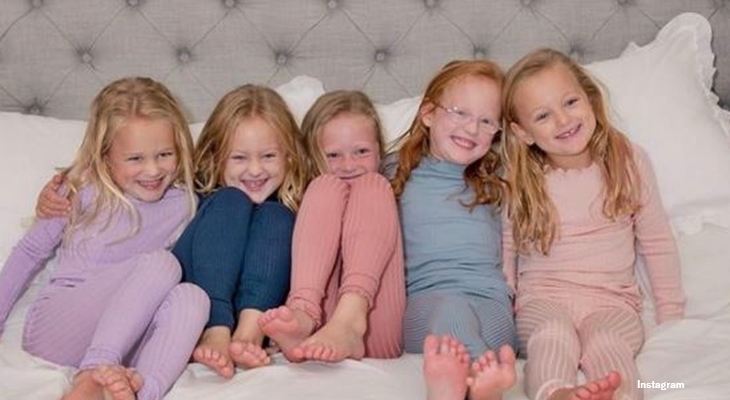 OutDaughtered fans really, look forward to a new season of the TLC show. The quints are now six and their big sister Blayke is 10. That means fans saw the show for six years now, and they never tire of the antics that the kids get up to. It certainly seems like a sure-fire winner for the network. This week, the Busby family went to a fashion show for their clothing line, Graeson bee. At the after-party, the quints danced themselves to a standstill.

OutDaughtered Fans And The Big Secret

Last week, Danielle Busby teased her fans about a big secret that the family kept. Fans really hoped that it might be a new season for the TLC show. Later, Adam posted a photo of Hazel and a camera. He told his fans that the show will come with a new intro. Plus, he talked about the quints being “producers.” Well, fans assumed that was the secret. But later, Danielle shared about the fashion show.

The OutDaughtered mom shared about the Graeson Bee fashion show on her Instagram Stories. However, fans hoping for a glimpse of the quints and Blayke on the ramp were disappointed. Instead, she posted a lot of photos of her adult family and friends. So, we didn’t report on it. Fortunately, Danielle shared some footage of the after-party. The kids and cousins like Bronson Mills, and a busload of parents enjoyed themselves.

OutDaughtered Quints Dance Themselves To Exhaustion

The video clips that Danielle Busby shared showed that it really was a fun party. Uncle Dale, Aunt Kiki, and Adam all danced with the kids. Plenty more people jumped and danced enthusiastically. All the quints joined in, as did Blayke. Parker liked jumping up and down to the music. Actually, fans might have felt a bit worn out after watching them. And yes, that’s what the quints felt like as well.

OutDaughtered fans often see the quints modeling for the Busby’s clothing line store. Adam and Daniel actually run at least seven businesses between them. TLC fans flock to see their seasonal outfits on the store’s website. Parker Kate always looked very poised, and many folks think that one day, she might become a professional model.

In the latest holiday category, the OutDaughtered quint, Parker wears a red “Timeless Velvet Dress.” Retailing at $45, she looks as cute as a button while managing to look very professional. Meanwhile, Riley looked cool and relaxed in her less formal “Holiday Plaid Twirl Dress.” Blayke also looks really trendy in her selection of dresses.